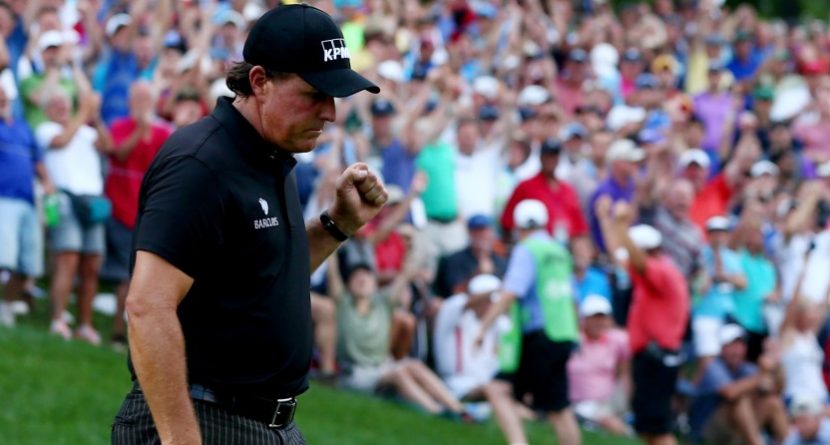 He might not have won the PGA Championship on Sunday afternoon at Valhalla, but Phil Mickelson played his way onto the U.S. Ryder Cup squad, forcing out the injured Jason Dufner in the process.

Mickelson will represent America for a record 10th time next month at Gleneagles, having climbed into one of the coveted top-nine Ryder Cup point spots thanks to his strong showing at the year’s final major. Prior to the tournament, Mickelson was adamant that he wanted to earn his way onto the team instead of U.S. Captain Tom Watson choosing him otherwise.

“I’m confident that I’ll get on the team on my own and won’t require that pick,” Mickelson told Reuters on Wednesday.

Dufner was previously inside the top nine on the Ryder Cup points list, however withdrawing from the PGA Championship due to a neck injury bumped him out of team contention. There is still a (likely) chance that Tom Watson will use a captain’s pick on The Duf.

Other Hot Links:
– Major Mulligan: What If Rory & Caroline Didn’t Break Up?
– Rickie Fowler, Rory McIlroy Promise Each Other More Battles
– Tweek in Review: The Week’s Best Tweets
– PGA Championship Ratings Highest Since 2009
– 11 Best GIFs from the 2014 PGA Championship
– The Fringe: Michelle Wie to Miss 3-5 Weeks Due to Finger Injury