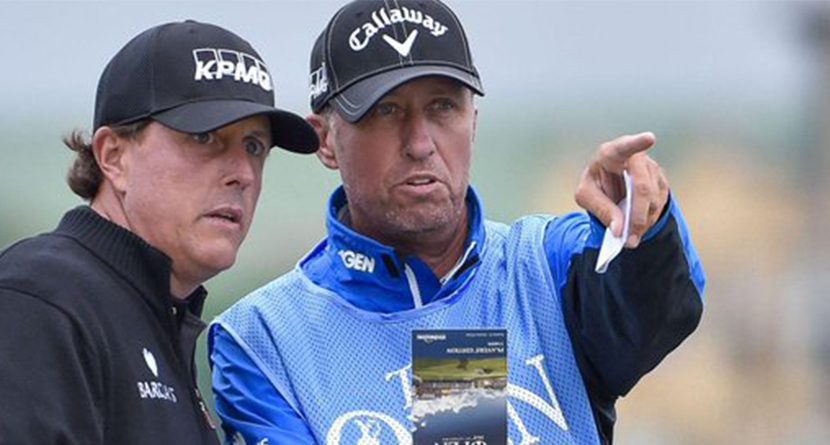 Growing up, your parents always told you to have a back-up plan.

In the cut-throat world of professional caddies, that mantra holds especially true as players and caddies break up regularly, often for no better reason than the player needs a change of scenery. Next week at the RSM Classic at the Sea Island Resort — formerly the McGladrey Classic — Jim “Bones” Mackay, Phil Mickelson’s longtime caddie, and John Wood, Matt Kuchar’s loop, will try out a back-up plan of their own: on-course reporting.

The deal, which has been in the works for months, will give Mackay and Wood a chance to receive the club selection signals from their usual counterparts and, they hope, add some unique commentary to the event.

“We have gotten to know course reporters very well over the years, and we’re fascinated with everything that goes into producing and covering a professional golf tournament,” Mackay said. “We are looking forward to being a part of the Golf Channel team next week.”

“I hope Bones and I can bring a unique perspective to golf on the PGA Tour and that viewers will find interesting what we as caddies are thinking out on the course,” Wood added.

The experiment nearly didn’t come to fruition after Wood and his boss of nine years, Hunter Mahan, recently split. Wood and Kuchar linked up and are currently playing in their first event together at this week’s OHL Classic at Mayakoba.

While Wood believed he would have the week off originally, his new boss was planning to play in the RSM, a home game for the St. Simon’s Island-based Kuchar. However, Kuchar agreed to let his longtime coach, Chris O’Connell tote the sticks around the Seaside Course at Sea Island Golf Club next week so Wood could try his hand at commentating.

The coverage will run next week from 1-4 p.m. on Golf Channel, Thursday through Sunday.