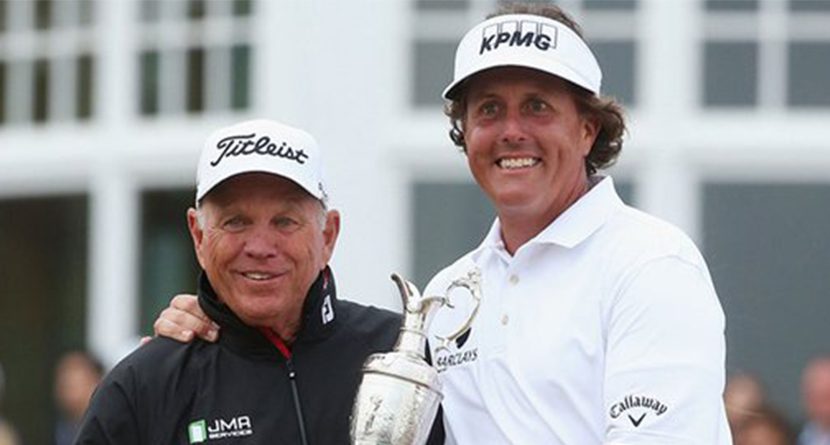 Phil Mickelson and swing coach Butch Harmon have decided to stop working together, Golf.com originally reported. The split ends an eight-year working relationship during which Mickelson racked up 12 PGA Tour wins, including a pair of major championships.

“I’ve learned a great deal from him in our eight years together,” Mickelson said in a statement. “It’s just that at the moment I need to hear new ideas from a different perspective.”

“I’ve thoroughly enjoyed working with Phil and we’ve had great success together,” Harmon said in the mutually-released statement. “Helping him win the Open Championship in 2013 was one of the pinnacles of my career. I see nothing wrong with him seeking advice from another source. We’re great friends and always will be.”

GolfDigest.com reported early Thursday that multiple sources have confirmed that Mickelson has begun working with Andrew Getson, an instructor based out of Grayhawk Golf Club in Scottsdale, Ariz. Getson, a former tour professional in Asia, Australia and on the Nationwide/Web.com Tour, has previously worked with Kevin Streelman. Interestingly enough, he’s also worked with diplomatic golfers such as Bill Clinton and Prince Andrew.

Mickelson hasn’t won anywhere in the world — outside of Tuesday money games — since the fateful Open Championship of 2013. Harmon, speaking with Tim Rosaforte, said he had a feeling the split was imminent. Things were getting stale, Harmon said, and he completely understood Mickelson’s desire to try to work with someone else.

From the Getson perspective, the Aussie’s teaching philosophy widely falls in line with Harmon’s: neither is too keen to revamp an entire swing, instead making small tweaks to improve flaws evident in the motion. At 45 years old, Mickelson’s flaws will naturally lean more towards preservation. Coming off of a 3-0-1 performance in the Presidents Cup, Mickelson has shown that he still has the game — and a knack for confounding decisions — of a much younger player.

Now, it is up to Getson to help one of the most interesting and entertaining people in the game as he embarks on the back half of his 40s.