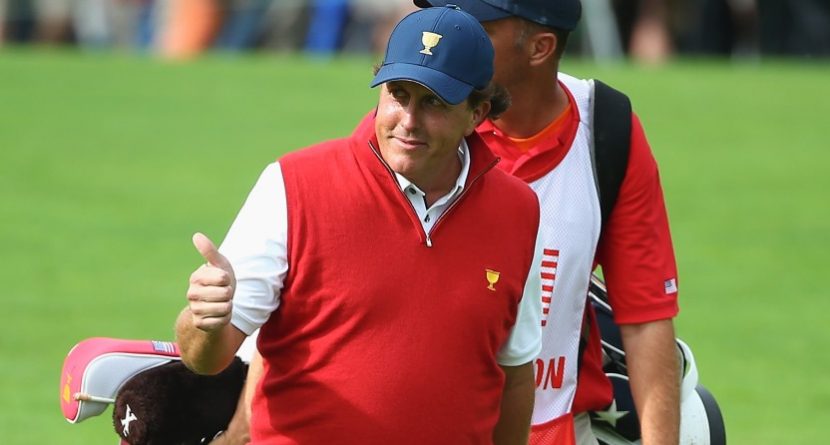 Phil Mickelson has played 12 PGA Tour events this 2013-14 season. He’s finished in the top 10 exactly zero times, he’s withdrawn mid-tournament twice, and he’s been cut three times – two of which came at the biggest events thus far: the Masters and the Players Championship. It’s the worst start to a season in his Hall of Fame career.

But that hasn’t diminished Mickelson’s legendary confidence. In a column written by ESPN.com’s Rick Reilly, Lefty boldly claimed, “The next five years are going to be the best of my career.”

Then you realize at this point last season, Mickelson was ranked at the exact same spot in the world rankings after having been cut at the Players and tied for 54th at the Masters. He only proceeded to take another runner-up at the U.S. Open and then win the Open Championship. That shot him to world No. 2.

Mickelson had more for Reilly.

Really cool, Phil. That would be really cool. Now how about you show us that might be possible?

A decent performance prior to this year’s U.S. Open would help. And it’d help your chances of making the U.S. golf team for the Rio Games, because as of this moment, you’re on the outside looking in. Only the top four Americans in the Official World Golf Rankings can go, and you’re currently the fifth-ranked U.S. player.

“My body isn’t beat up like a lot of guys,” Mickelson continued. “My swing isn’t like Tiger’s, or Jason Day’s, Dustin Johnson’s, even Hunter Mahan’s. I don’t have a really fast golf swing that has a lot of viciousness, a lot of fierceness, where the torque and power that’s released is hard on the knees, the back. My swing is big and long and has a wide, wide arc. That doesn’t put any pressure on my body … I’m like a kicker in the NFL. I’m not beat up. I can keep playing at a high level for a long time.”

If Miguel Angel Jimenez can do it, can’t Phil Mickelson?

Related Link: Phil Mickelson: ‘I Want To Be An Olympic Athlete’