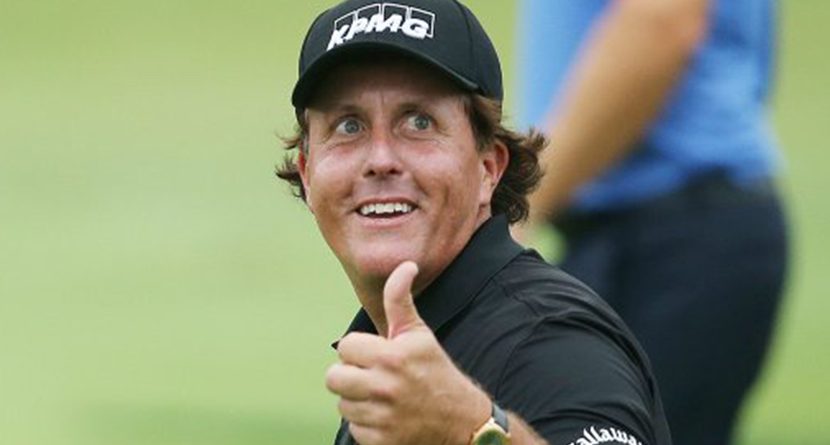 Jack has Memorial, Arnie has Bay Hill, Tiger has the World Challenge and now Phil has the CareerBuilder Challenge.

The PGA Tour announced on Wednesday that Mickelson would be replacing former president Bill Clinton at the Palm Springs Tour stop as the face of the event.

In this capacity, Mickelson will promote the tournament and participate in various functions during tournament week. The CareerBuilder Challenge traditionally is the PGA TOUR’s first tournament on the mainland following two weeks in Hawaii to start the calendar year.

“I’m very excited to undertake the role of tournament ambassador and look forward to doing what I can to help with the continued growth of the CareerBuilder Challenge,” Mickelson said. “Our family loves the area and we have a home in Coachella Valley, so this is a natural fit for me.”

In addition to Mickelson’s new role, it was announced that the Clinton Foundation, which has partnered with the tournament for the past five years, will end its official role with the tournament. The Foundation and the Clinton Health Matters Initiative, however, remain committed to continuing their work in the Coachella Valley to improve the health and wellness of the nearly 400,000 local residents, and the Health Matters Annual Activation Summit will continue in a new location next year.

“I have treasured the opportunity over the last five years for the Clinton Foundation to be part of this storied tournament that honors Bob Hope’s legacy of service in the Coachella Valley,” said President Clinton, Founder of the Clinton Foundation and 42nd President of the United States. “I’m honored that we could build on that legacy by working with dedicated partners to bring great golf to the desert and improve the health and wellness of nearly 400,000 local residents. I look forward to continuing the Foundation’s work in the Coachella Valley, and to seeing the exciting new chapter of the tournament’s history that will be written with Phil Mickelson joining on as a partner with the PGA TOUR, Desert Classic Charities, and CareerBuilder.”