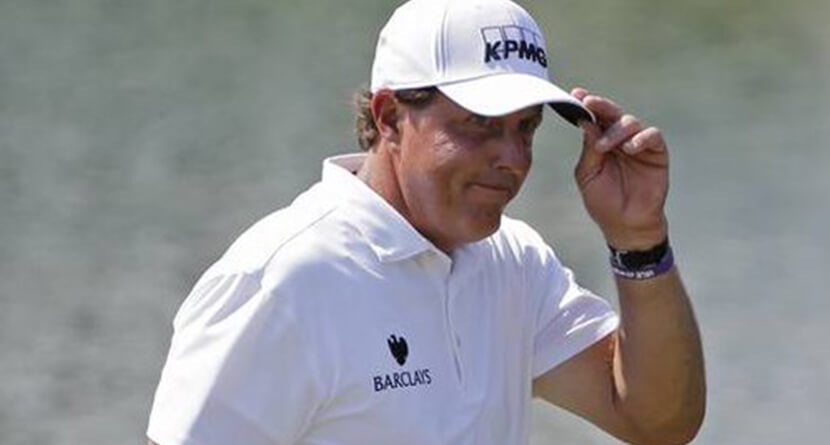 Phil Mickelson wasn’t scheduled to have a press conference before the Memorial Tournament began this week, but the 5-time major champion did meet with a small group of journalists on Wednesday to make a statement about his involvement in an insider trading scandal in which he was named a “relief defendant.”

I’d like to say that I’m disappointed to have been a part of that whole thing, but after a thorough investigation, I’m pleased that it’s behind me, that it’s over. I’m appreciative of my family and friends and my companies and their faith in me and their support of me.

Further speculation has noted that Mickelson might be under the gun in terms of PGA Tour discipline for his association with professional gambler Billy Walters. Mickelson dodged the question at first, but confronted with it again, responded.

Q. The Tour talked about a clause in the handbook about associating with gamblers, et cetera, et cetera. Have you talked to them about it, or have they talked to you?

PHIL MICKELSON: Well, I have to be responsible for the people I associate with. Going forward, I’ll make the best effort I can to make sure I represent myself, as well as my family, as well as my companies, in the way that I want to and they deserve.

Q. Have you met with the Tour on that issue?

PHIL MICKELSON: No, I haven’t.