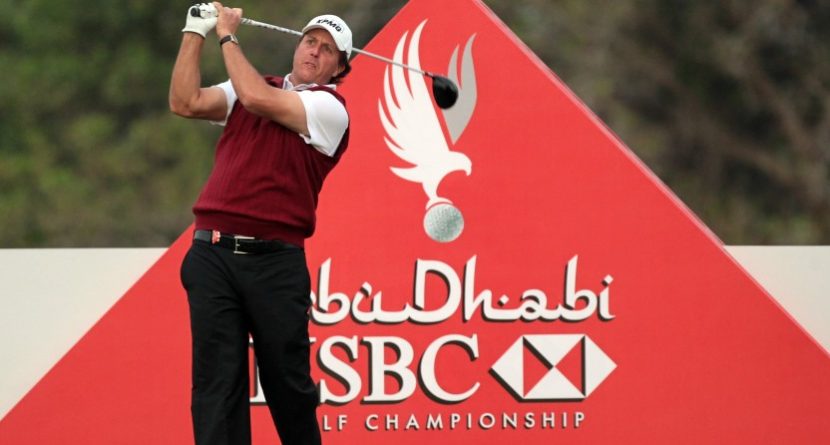 Phil Mickelson plans to play a thinner schedule in 2014 so he can maximize his performances in the majors. To get the year started, he’ll appear at the Abu Dhabi Championship for the first time since 2011.

The reigning Open Championship winner announced the news Tuesday, and will join an Abu Dhabi field that already includes Rory McIlroy, Justin Rose and Luke Donald. The European Tour event runs Jan. 16-19, the same week as the PGA Tour’s Humana Challenge in Mickelson’s home state of California. That’s where he began the 2013 season, which saw him play 21 PGA Tour events.

“To play Abu Dhabi in the early part of the year is a great opportunity,” Mickelson said in a news release. “I’ve wanted to return since my first time there in 2011. The golf course and facilities are outstanding and the quality of the field and the good weather make it a great place to start my season.” The 43-year-old has made it clear that he’s cutting back his schedule but intends to compete in at least one tournament immediately preceding the four majors. He plans to play two events leading up to the U.S. Open, the only major Mickelson has yet to capture during his career.

Considering the Abu Dhabi event comes three months ahead of The Masters, the year’s first major, this appearance doesn’t fit in with Mickelson’s stated goal for 2014. A hefty appearance fee is likely what’s drawing Lefty to the Middle East.

Or he’s just taking advantage of the chance to play a unique locale. After all, he can play The Club at PGA West in La Quinta, Calif. – site of the Humana Challenge – as much as his heart desires after he retires.