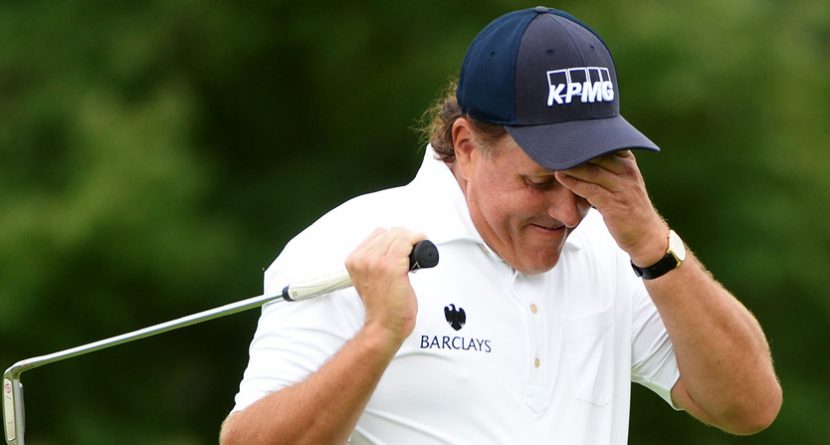 Phil Mickelson has had a love/hate relationship with the U.S. Open over the course of his career. Like a scorned lover, Mickelson keeps getting heartbroken at his national Open — finishing as runner-up a record six times — but he keeps coming back for more, year after year.

The only title he needs to complete the career grand slam, Mickelson will tee it up at Oakmont Country Club this year in search of a reprieve from the heart ache.

Until he does get to hoist that U.S. Open Trophy, however, we’re left with the close calls through the years. ESPN.com’s Kevin Van Valkenberg ranked each of Phil’s runner-up finishes by how much misery they caused Lefty. Here’s a sample: What might have been: Fresh off his first major championship at the Masters, it looked like Mickelson had every aspect of his game under control at Shinecock, and the New York crowd showered him with love as he walked up every fairway. His second-round 66 was a thing of beauty. He could have played in the final group with Goosen on Sunday, but bogeyed the last two holes on Saturday to fall 2 shots back going into the final round.

Moment of truth: If there is a consistent theme in all of Mickelson’s U.S. Open near misses, it’s his putting tends to let him down in key moments. But it’s also a bit of a paradox, because Mickelson is in the position to collapse in big moments because he thrusts himself into the mix by going on electrifying birdie runs.

On Sunday, with Goosen’s swing looking shaky, Mickelson made three brilliant birdies at Nos. 13, 15 and 16 and had a 1-shot lead with two holes to play. But it all came apart on the 17th green, where Mickelson 3-putted from 5 feet for double-bogey.