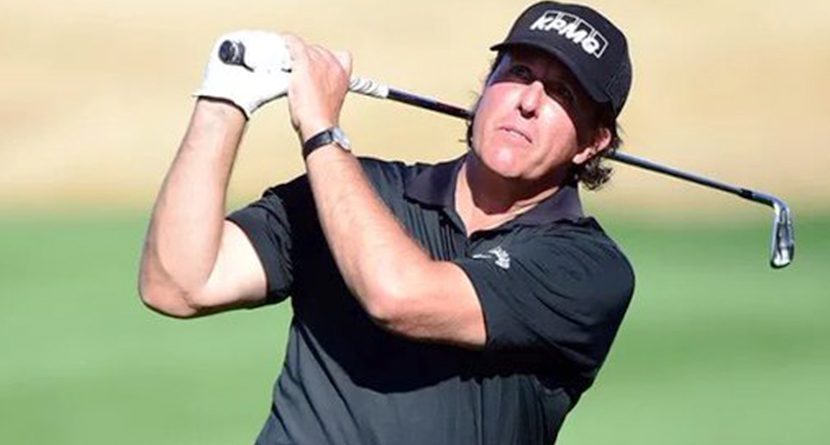 Remember that nearly $3 million Mickelson reportedly transferred last year to an intermediary who eventually pleaded guilty to three counts of laundering funds? The intermediary has changed his tune, filing a court motion on Tuesday to withdraw his guilty plea.

A California man who last year pleaded guilty to transferring nearly $3 million to “an illegal gambling operation which accepted and placed bets on sporting events” filed a court motion on Tuesday requesting to withdraw his guilty plea.

Gregory Silveira of La Quinta pleaded guilty in June to three counts of laundering funds from an unnamed “gambling client” of his between February 2010 and February 2013. Outside the Lines, citing sources, last year identified golfer Phil Mickelson as the client.

Federal officials have declined to offer details about the case. But on Tuesday, court filings by Silveira’s new defense attorney stated that Silveira pleaded guilty initially because of bad advice from his original attorney and that Silveira was, by transferring the money, attempting to perform a “personal favor to an individual who did not wish his wagering activity to become public.”

According to the original court documents, Silveira accepted a wire transfer of $2.75 million, which he knew was part of “illegal sports betting.” The money, according to the documents, came from a “gambling client” and had been transferred into Silveira’s Wells Fargo Bank account.

Documents filed Tuesday, however, state that Silveira’s original attorney, James D. Henderson Sr., made an error in advising his client to accept a guilty plea. According to the filing, “Silveira’s original counsel had told him that the money Silveira received from the gambler was ‘tainted’ and that Silveira’s transfer of those funds constituted money laundering. This advice was incorrect.” Henderson could not immediately be reached for comment.

The source of the money, according to documents filed Tuesday, was a gambler known to Silviera who did not want his identity publicized but wanted Silveira to use the transferred funds to pay off a betting debt. Silveira, who splits time between San Diego and La Quinta, is described in documents as a friend of a number of individuals who are also avid golfers.

According to the report, Mickelson declined to comment and has not been charged with a crime, nor is he under federal investigation. Whether or not the new revelations will result in anything more than a headache for Mickelson remains to be seen, but for the story to break the week before the first major championship of the year is less than ideal.

Bones: I like driver, fly that bunker, wedge in.
Phil: I like the Jets-Ravens-Titans parlay.
Bones: Focus please. pic.twitter.com/yboVHzLBpw