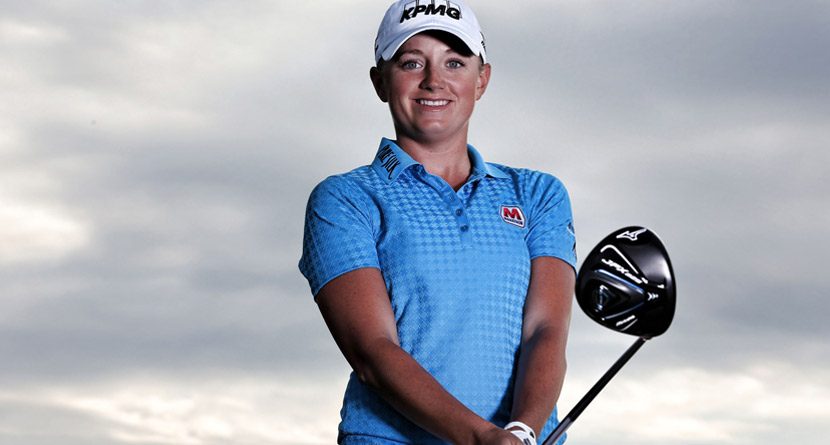 During Sunday’s final round of the 2013 Reignwood LPGA Classic in Beijing, China, American Stacy Lewis found herself in a tough spot. She was fighting cooling temperatures and thick smog while nursing a one-shot lead over China’s Shanshan Feng, who had a massive gallery following throughout the afternoon.

What made things even worse for Lewis was the obviously-biased gallery, which showcased what could possibly be the worst display of poor sportsmanship in any golf tournament.

Not only did fans spend more time rustling, talking and snapping photos of players throughout the week, they also cheered each time Lewis missed a crucial putt during her final round. Visibly shaken and annoyed by the response she was receiving, Lewis ultimately succumbed to the pressure and lost her lead to the home-crowd favorite after what many have referred to as a “miracle shot.”

Following her round, Lewis told reporters that she was disappointed not only with the outcome of the tournament, but also how she was treated by the Chinese fans.

“I feel like it was just taken from me,” Lewis said. “You’d like to win on a good shot, but, obviously, it wasn’t a good shot. It’s very frustrating. It was a frustrating day just with the crowds and dealing with all that. It was hard to play today.”

It wasn’t too long before Lewis turned to Twitter to further elaborate on her displeasure. While somewhat passive-aggressive in her remarks, it was clear that Lewis was heated. “Between all the cameras and cheering when I missed putts. It was just really hard to have fun out there. On to the next.”

“Btw what (sic) till you see the shot on 18 that won it! Let’s just say it involved a rock and the flag stick.”

Lewis immediately received a sort of social media backlash from speaking her mind in 140 characters or less, eventually prompting her to declare an abandonment of the social media outlet altogether.

“For those whose (sic) were actually supportive on twitter, sorry to say I will be signing off of here. I’m sorry I say what I believe.”

This is a sad turn of events for a golfer who we at the Back9Network not only highly respect, but enjoy corresponding with from time to time. Always outspoken yet respectful, Lewis even voiced her opinion to Back9 on a recent Golf Digest issue that had Holly Sonders on its cover, saying that she wished an active LPGA player had been featured instead.

In my opinion, Lewis was completely dead-on with her comments regarding fans at the Reignwood. Anyone who saw a second of the late-round footage should agree that Lewis was rudely mistreated by the gallery repeatedly. Not only was it hard to watch and a terrible display of poor sportsmanship, it was exactly what the LPGA doesn’t need these days if it hopes to boost the image of top players around the globe.

Could you imagine if a player like Inbee Park was treated the same way on American soil? It would instantly become an international news item, chastising American golf fans for their behavior and disrespect. This week’s mistreatment of Lewis further showed a huge double-standard among global golf fans that reaches far deeper than sour grapes.

Hopefully Stacy Lewis is only taking a brief hiatus away from Twitter, because her true fans – and true fans of the greatest game in the world – will be missing out on a chance to communicate directly to one of the best, most-honest golfers on the planet.