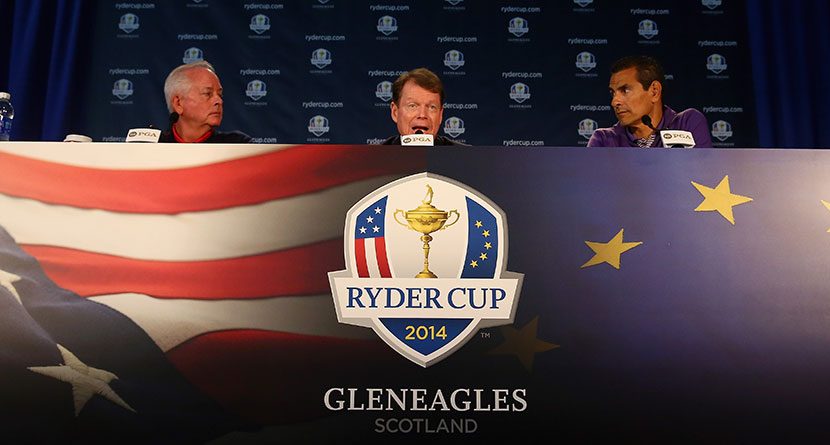 With the Deutsche Bank Championship underway, the final audition for potential Ryder Cup captain’s picks is ongoing. With Ryder Cup captains Tom Watson and Paul McGinley set to announce their final selections on Tuesday, six lucky players will soon be added to the rosters.

Indeed, it’s a pressure-packed time for this year’s captains. To get inside the minds of Watson and McGinley, we spoke to Back9Network Ambassador Tony Jacklin — a man who knows quite a bit about serving as captain at the Ryder Cup.

“I knew after the U.S. Open that the European team was more or less the favorite,” said Jacklin, who captained the team in four straight Ryder Cups from 1983-1989. “I thought the U.S. team was strong prior to the Open but a few negative things have changed the picture.”

Chief among those negative events, of course, was Tiger Woods’ announcement that he had withdrawn himself from Ryder Cup consideration following a season hampered by injury. The U.S. team also lost the potential services of past Ryder Cup contributors Dustin Johnson, who’ll miss the biennial competition while on official voluntary leave, and Jason Dufner, who’s out with injury.

That was, until Rory McIlroy caught fire and won the Open Championship, Bridgestone Invitational and PGA Championship in succession.

“McIlroy’s wins have been great and will bring those players confidence,” Jacklin said.

Which brings us to the captain’s picks, all to be settled this weekend. With some help from the two-time major championship winner and seven-time Ryder Cup competitor, we take a look at the players on the hot seat this week.

“Poulter and Westwood are the question marks,” Jacklin said. “But I can’t imagine Poulter not getting a pick seeing what he brings to the table as a player with all of the contributions he’s made. With Stephen Gallacher, the question is going with him as a rookie,” he said. “Or, can Westwood be as good as he has been in the past? These are all questions but [McGinley] is close to the guys.”

Luke Donald: A fixture for the European team in recent years, the former World No. 1 is 10th in World Points and has a chance to all but clinch his spot with a solid showing this week at the Deutsche Bank Championship.

Lee Westwood: Yet another player who has helped the European side in recent years, Westwood has played well as of late. He turned in a T-15 at the PGA Championship and was T-19 at the Bridgestone in July.

Ian Poulter: Poulter seems like a lock for McGinley.  Currently, Poulter, who helped will the Europeans to their comeback victory in 2012, is currently ninth in European points and 12th in the side’s World Points.

Graeme McDowell: A new father, McDowell opted to sit this week out. In doing so, he risks moving from his comfortable position as ‘last guy in’ through qualifying. If McDowell stays in his current position at weekend’s end, that would allow McGinley to select the three European staples — Donald, Westwood and Poulter — as captain’s picks.

Stephen Gallacher: The above scenario, of course, leaves out this red-hot player. A strong showing — or victory— from Gallacher would bump McDowell out of the final qualifying spot and create a four-player conundrum for McGinley when choosing his final three spots.

“For Tom, he has a lot of choices that he can make. The captain loves to know in his mind that he has the 12 best guys available. You never know when the time comes what the weather will be like. I don’t imagine them having four or five good days in September at Gleneagles. But you’re only exposing eight players until that final day when you have all perform. Whatever Tom does and Paul does, I’m sure it’s what they see as the best way. “

Hunter Mahan: With his win last week at The Barclays, Mahan ultimately re-entered the captain’s picks discussion. Still, he remains No. 25 in Ryder Cup points and would need to turn in another stellar finish this week to be considered.

Ryan Moore: A trendy sleeper pick, Moore has quietly put together a solid season and currently sits 11th in points. The big draw for Moore, of course, is his quality around the greens and history of success in match play accumulated during a terrific amateur career.

Keegan Bradley: The 2012 PGA Championship winner, the fiery Bradley went 3-1 in the 2012 Ryder Cup at Medinah. He paired well with Phil Mickelson, who’s already secured a spot, and started hot at the Deutsche Bank Championship.

Brendon Todd: A relative unknown to non-golf superfans, Todd is 12th in points. Todd won the HP Byron Nelson Classic in May and could be of service to Watson and Co. thanks to his No. 6 ranking in the Scrambling category.

Brandt Snedeker: There are few players in the game who can putt like Snedeker, who currently sits 20th in points. With so many crucial moments in the Ryder Cup relying on a player’s ability to make a clutch putt, that could put him over the edge.

Webb Simpson: A major winner who was successful in earning points at Medinah, Simpson is a popular pick for one of the three captain’s selections, despite some inconsistency in his ball-striking as of late.