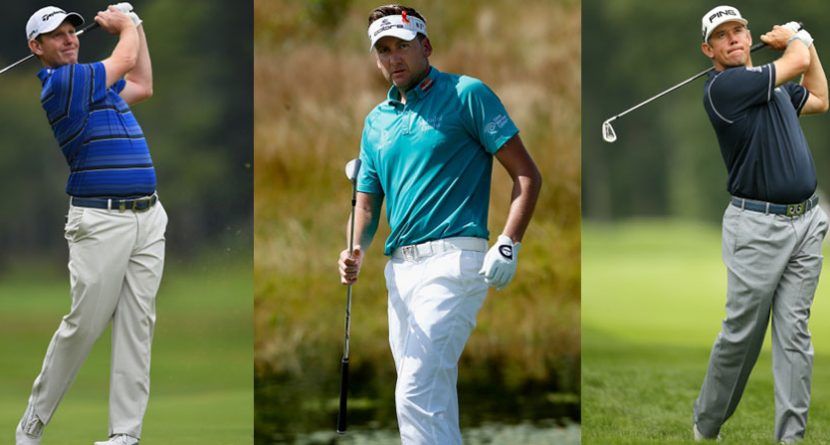 With the European roster complete, we take an in-depth look at the team:

Captain: Paul McGinley
Ryder Cup record: 2002 (winners), 2004 (winners), 2006 (winners), 2010 (Vice Captain) (winners), 2012 (Vice Captain) | Played 9, Won 2, Lost 2, Halved 5, Points 4½
The man who holed the winning putt at The Belfry in 2002 before throwing himself into the pond beside the 18th green left nothing to chance in his planning. There will be no left-field selections when it comes to putting together his fourball and foursomes pairings. He has never been on the losing side, and won’t want that habit to change at Gleneagles. Delighted with his team, McGinley will be confident of recording another victory for Europe.

Rory McIlroy, Northern Ireland, 25
Ryder Cup record: 2010 (winners), 2012 (winners) | Played 9, Won 4, Lost 3, Halved 2, Points 5
The World No. 1 has come a long way since describing the Ryder Cup as an exhibition match. He’s likely to have to play five times, and he’ll relish the challenge, having bounced back with victory in two majors this year. McIlroy hits the ball a mile and, at the age of just 25, will be playing in his third Ryder Cup. His teammates will be queueing up to partner him.

Henrik Stenson, 38, Sweden
Ryder Cup record: 2006 (winners), 2008 | Played 7, Won 2, Lost 3, Halved 2, Points 3
The Swede is hewn from granite and will fear nobody on the American team. Stenson is a man who has trawled the depths of despair in his career, losing both his form and much of his fortune. But he has shrugged it off and bounced back to claim his place among the best players on the planet. Can you imagine him trembling at the prospect of holing a crucial putt to win? Very unlikely.

Justin Rose, England, 34
Ryder Cup record: 2008, 2012 (winners) | Played 9, Won 6, Lost 3, Halved 0, Points 6
Now one of the most consistent players in the world, Rose produced a brilliant comeback to beat Phil Mickelson in singles play at Medinah in 2012. His putting was so good that day, that Mickelson actually led the applause. After everything he has been through in his career, Rose is utterly unflappable. If you were playing in foursomes, he is the man you would choose as your partner.

Martin Kaymer, Germany, 29
Ryder Cup record: 2010 (winners), 2012 (winners) | Played 6, Won 3, Lost 2, Halved 1, Points 3½
When Kaymer won the PGA championship in 2010, he seemed to have the world at his feet, but then he convinced himself he couldn’t win The Masters and decided to change his swing. His game went south, but the German battled back to win both the Players Championship and U.S. Open this year. He holed the winning putt for the Europeans at Medinah.

Sergio Garcia, Spain, 34
Ryder Cup record: 1999, 2002 (winners), 2004 (winners), 2006 (winners), 2008, 2012 (winners) | Played 28, Won 16, Lost 8, Halved 4, Points 18
It was only fours ago that the Spaniard hated golf so much that he walked away from the game. One of the best ball strikers of this –or any other — generation fell out of love with the game. That’s no longer the case. He gave Rory McIlroy the fright of his life at The Open and, incredibly, has found a way to become one of the best putters in the game. Like Seve Ballesteros before him, the Ryder Cup inspires Garcia.

Victor Dubuisson, France, 24
Ryder Cup record: Rookie
The Frenchman has a touch of Ballesteros about him. Yes, he can be wild, but he has a stunning short game and remarkable powers of recovery. Just ask Jason Day, who was taken to extra holes before coming out on top in the final of the Accenture World Match Play Championship. The more pressure there is, the better Dubuisson seems to play and he could be a key man for Europe.

Thomas Bjorn, Denmark, 43
Ryder Cup record: 1997, 2002 | Played 6, Won 3, Lost 2, Halved 1: Points 3½
Bjorn is arguably the scariest looking member of the European team. He does not have the happiest demeanor at the best of times, but since growing a beard he looks terrifying. Make no mistake about it though, the Dane is a ferocious competitor who has earned his place on merit. By his own admission, he has played some of the best golf of his life in the past couple of years.

Jamie Donaldson, Wales, 38
Ryder Cup record: Rookie
The Americans may look at Donaldson and reach the conclusion that he is a soft touch. He is no such thing. This is a man who occupied a qualifying place all season and the very week that position appeared to be under threat, he went out and won the Czech Masters. He is exactly the sort of man you want in your side – if he can cope with the atmosphere.

Graeme McDowell, Northern Ireland, 35
Ryder Cup record: 2008, 2010 (winners), 2012 (winners) | Played 12, Won 5, Lost 5, Halved 2, Points 6
The Northern Irishman has had a quiet time recently but won the French Open to prove he can still dig deep when required to do so. McDowell is a straight hitter, which makes him an ideal foursomes player, and he will look forward to renewing his partnership with McIlroy. He holed the winning putt at Celtic Manor after Hunter Mahan famously fluffed a chip at the final hole.

Ian Poulter, England, 38
Ryder Cup record: 2004 (winners), 2008, 2010 (winners), 2012 (winners) | Played 15, Won 12, Lost 3, Points 12
The Ryder Cup without Poulter would be like bread without butter, pepper without salt. He performed heroics at Medinah, almost single-handedly turning things around and convincing his teammates that they could pull off an unlikely victory. Poulter has struggled this year, but he was also out of form two years ago. He has an uncanny ability to lift himself for this event. For the U.S. team members, if they see the big staring eyes, they’ll know they’re in trouble.

Stephen Gallacher, Scotland, 39
Ryder Cup record: debut
Gallacher is a quiet, unassuming Scot, but anybody who underestimates him would be making a massive mistake because underneath it all beats the heart of a warrior. How else do you explain the effort he made at the Czech Masters and Italian Open? He won the Dubai Desert Classic earlier in the year against a stellar field, and knows Gleneagles like the back of his hand. This captain’s pick could be the surprise star of the team.