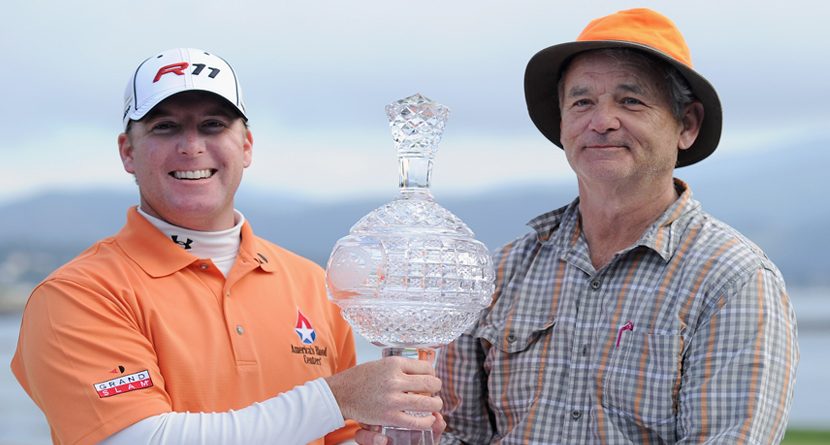 The AT&T Pebble Beach Pro-Am is the most unique event on Tour for a couple reasons.

For one, it’s at Pebble Beach. Perhaps the most recognizable name in all of golf in terms of courses, Pebble is universally acclaimed for it’s scenic Pacific Ocean views and challenging links layout. But what makes this tournament so special and entertaining is the celebrity aspect. It’s the one time of year we get to watch some of the most recognizable faces in the world tee it up with the guys who do it for a living. We get to watch Bill Murray toss a huge fish into the crowd and do the pyramid in the middle of the fairway. We also get to see guys like Ray Romano try to break 100 while scratch athletes like Tony Romo prove they can (almost) hang with the big boys.

While the pros are still concerned with winning the individual tournament, the duo aspect is perhaps more intriguing in terms of the fans’ perspective. So, having taken a look at this year’s pairings, let’s handicap the field:

Dustin Johnson and Wayne Gretzky (11 handicap) – Odds: 2-1
There are so many factors at play here it’s almost impossible not to consider them favorites. First you have D.J., who has already won twice at Pebble. Then, you have the greatest hockey player of all time getting a decent amount of strokes. Even further, you have the fact that Dustin is very publicly dating Gretzky’s daughter, Paulina. This type of stuff is what they make movies about. Former hockey legend wins a pro-am with his  possible future son-in-law who is one of the world’s best golfers. DJ and The Great One. Lock it up.

D.A. Points and Bill Murray (12 handicap) – Odds: 3-1
I’m a firm believer in team chemistry. I think that regardless of a team’s talent that they can beat a “superior” opponent if they share a special competitive bond. Well, Points and Murray took it home two years ago, and they clearly enjoy each other’s company. You might recall an awful attempt at a chest bump they shared after Points eagled from the 14th fairway. The point is that you can’t teach chemistry. While there are clearly better celebrity players in the field, I’m confident that the guy who caddied for the Dalai Lama will pass some of his learnings on to D.A. Points in hopes of another victorious weekend.

Jordan Spieth and Tony Romo (0 handicap) – Odds: 5-1
Romo might be the best celebrity stick in the field. Pairing him with young up and comer Jordan Spieth makes for a potentially lethal duo. Spieth has all the game necessary to go low but, his lack of experience is a bit off-putting. Also a bit concerning is the fact that Romo’s handicap won’t benefit their net score as much as someone like Murray who sits at a 12. Regardless, I’m looking for Spieth, 19, to have a bit of a coming out party at Pebble. Here’s to hoping that Romo is better on the back nine than he is in the fourth quarter.

Jason Day and Jim Harbaugh (12 handicap) – Odds: 8-1
If there’s one thing I know about Jim Harbaugh is that he is one hell of a competitor. He is not the kind of guy that is going to show up and be all smiles on the first tee. This guy is going to be thinking one thing and one thing only: win. I have a feeling he has the chance to put together some of the best golf of his life and reap the benefits of net scoring like a bandit. I love that he is paired with Day who is incredibly talented and in the middle of a huge resurgence. This is a scary duo, especially if Harbaugh harnesses his hatred for Jerome Boger and the rest of the Super Bowl crew. Look for these two to make some noise. Camilo Villegas and Chris O’Donnell (8 handicap) – Odss: 13-1
Villegas has been struggling over the past couple of seasons but he is finally healthy and seems primed to return to form. His talent is undeniable and if he can put it all together for a weekend he’s got all of the ability necessary to go low. O’Donnell is obviously well known for his role as Robin in the Batman series so, if Robin and the man they call Spiderman can coexist then this pair has a chance to surprise the field.