Progress and Tradition:~Working Side By Side 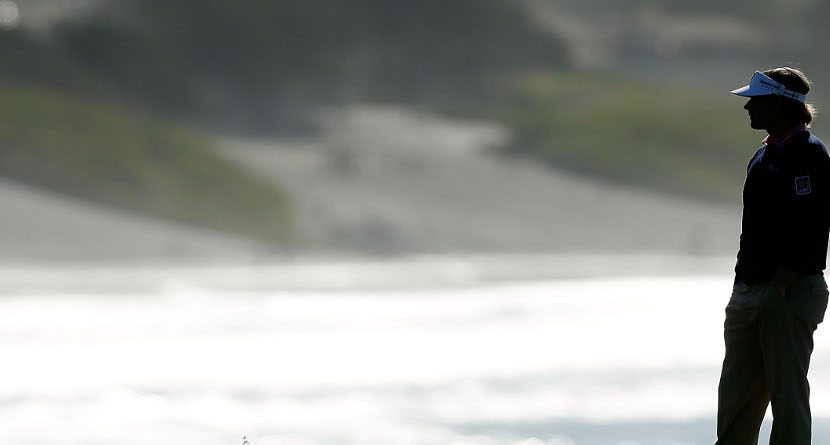 Having laboured over the last decade or so to wring from its slightly anonymous venue an identity capable of seducing sponsors and boosting Nielsen scans, the Waste Management Phoenix Open has risen of late to become an immovable landmark on the PGA Tour’s early-season swing.

The key to its vigour, of course, has been TPC Scottsdale’s 16th hole, an innocuous par 3 that, for tournament week, is ringed by banks of temporary seating and populated by upwards of 30,000 willfully raucous fans. Here, what was once an annual display of alcohol-induced civil disobedience has hardened into something altogether less threatening. Within this prefabricated stadium, the traditional rules of spectatorship are suspended. Fans catcall, joke and heckle; players punt, sing and dance their way to the 17th. It’s chaos by mutual consent.

Offering as it does a timely shot of insulin to an otherwise comatose body, Phoenix looks an unreservedly good thing for the sport. Half block party, half competitive event, it draws the PGA Tour into closer alignment with the supercharged “events” of sporting prime time. It has even been suggested that in its runaway success the future of golf as both a televisual event and live entertainment can be glimpsed. Interaction with the fans, spontaneity, gladiatorial combat, the lingering threat of public humiliation: what’s not to love?

In short, Phoenix appeals to everything apologists and proselytizers like to believe about golf in the post-Tiger era. That it’s no longer stuffy and pretentious; that its appeal can be more immediate and visceral, more populist; and most of all, that tournament golf is a sport played by athletes.

An uneasy blend of hard fact and half-truth, this reading of events in Arizona begins to look more flimsy and unstable the further one retreats from that cauldron of noise at 16. In fact, it takes only a short hop through time and space – to the Monterey Peninsula all of four days later – to lay bare the full extent of the groupthink at the heart of this triumphalist drive to rebrand the game.

They owe their close proximity on the PGA Tour calendar to little more than logistical necessity, but the slightly awkward juxtaposition of the Phoenix Open and Pebble Beach Pro-Am is nonetheless instructive; it speaks to something essential about the challenges facing advocates of radical change in the way golf is branded. As events, they belong to different worlds, maybe different times, but the balance of power doesn’t necessarily lie with those forces massed on the more progressive side of the spectrum.

Pebble Beach, after all, possesses a grasp on the heartstrings of golf fans everywhere. Though hampered somewhat by the predictable gouging and gurning of its amateur contingent, light entertainers and dead-eyed veterans of the celebrity golf circuit (in a word: no), it thrives on an aura of exclusivity and refinement. Perched on those windswept bluffs overlooking Carmel Bay, it’s impossible not to be seduced by a very particular blend of decorum, myth and old-world privilege. The going isn’t easy on those manicured fairways: you’re forever striding through the syrupy remnants of History, brushing past great events and even greater men.

Like its Southern cousin, Augusta National, Pebble Beach is at once a museum and place of worship. It demands awed silence, hushed tones and long, thoughtful stares into the middle-distance. Deliberate, self-conscious appreciation at all times: nothing else will do. Not only that, but on some deeper level, its aura and the foundations on which it rests – those sky-high green fees and waiting lists – are one and the same.

Sure, it can be claimed that the spectacular surroundings, all that coast and cliff, just make a bitter pill that bit easier to swallow, that all this snobbery and pretention does real golf a disservice, but in some ways, the game has always drawn a line of equivalence between exclusivity and value. The country club has always been the target of American middle-class aspiration, the ragged links a place where one can commune with sports’ higher powers, and there’s little day-glo marketing campaigns and prefab stadia can do to untangle that knot. At heart, fans aren’t craving equal access and no-holds-barred contact. Instead, they long to be among the privileged few.

The caddie races and skits of late January might be a nice distraction, but they’re embraced only because the Phoenix Open has little of real weight to commend it. Scottsdale is a free punt; it risks nothing in the way of prestige or mystery. To conceive of similar “innovations” at a venue of Pebble Beach’s calibre or – heaven forbid! – a major championship is next to impossible. No baying crowds will profane the Road Hole any time soon.

Your progressive self might lament this fact, talk of “growing the game” and “taking it to the people,” but somewhere deep down, the part of you that dreams of negotiating Amen Corner or striding across the Swilcan Bridge, is breathing a deep sigh of relief.