Raising a PGA Tour Baby On the Road Isn’t Easy 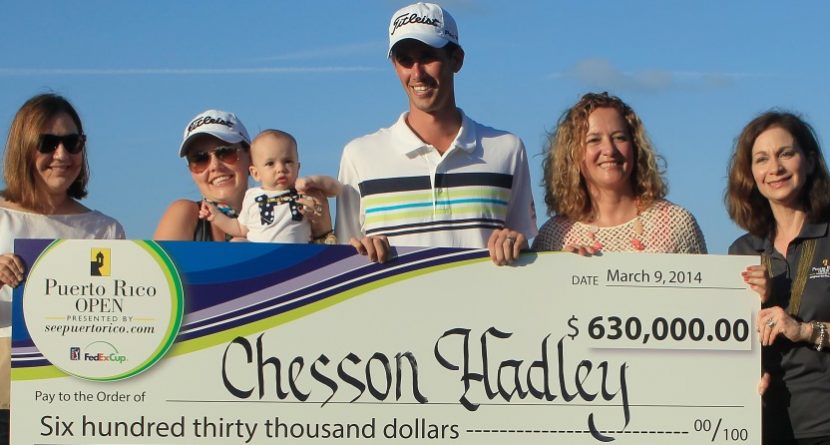 More and more these days we’re getting a glimpse into the lives of professional athletes. It’s not typically through traditional media – TV cameras or photographers – but rather through whichever media athletes feel comfortable using – Twitter, Facebook, blogs.

For PGA Tour rookie Chesson Hadley, it’s the latter. He regularly chronicles his adventures in his blog, HadsCorner.com, and on Wednesdays, he hands the reigns over to his wife, Amanda.

New blog post up at http://t.co/rqozbVAJj3! It’s #WifeWednesday so it is coherent and well thought out!

Amanda’s post this week is spectacular. It details life on the road with a pro golfer for a husband and five-month-old son, Hughes. Caring for a newborn is tough enough (so we’ve heard) with everyone sleeping in the same home every night. But keeping that kid happy night after night, hotel after hotel, city after city? Gives you more of an appreciation for golf wives.

Classic lines (written from the boy’s perspective):
– Starbucks warms my bottles
– My stroller doubles as a laundry cart
– I frequently chaperone my parents’ dinner dates… in my pajamas. The 26-year-old Hadley picked up his first PGA Tour win last month at the Puerto Rico Open, just his 13th start on tour. That gave him $630,000 (that’ll buy some diapers), a two-year tour exemption and spots in The Players Championship, PGA Championship and Tournament of Champions.

And another cute baby photo: