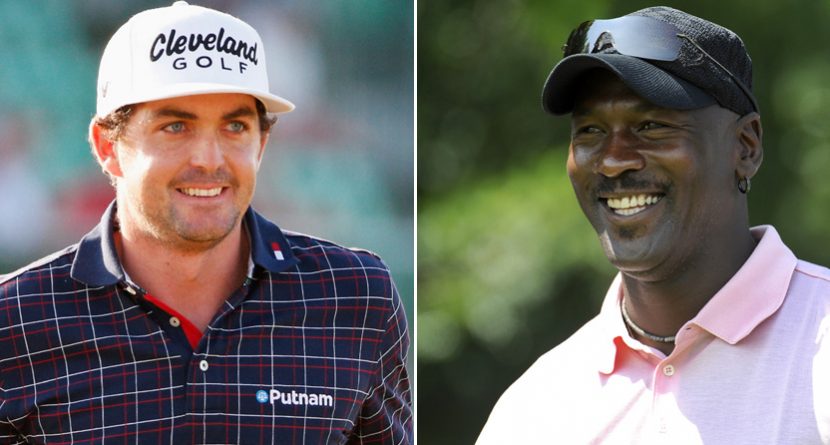 Keegan Bradley’s affinity for Michael Jordan is nothing new. A year ago, the golfer revealed that he’d been using Jordan, his neighbor in Florida, as a sort of “mental coach” to be more confident on the course. The two frequently play golf together, and even included Rickie Fowler a few weeks ago.

Soon after the mental work began, Bradley sent out an Instragram photo of his first pair of “Jumpman” golf kicks, and at the Presidents Cup last fall he rocked some elephant print Jordans. Earlier this month, he showed off his latest pair:

It appears that his Jordan love got Bradley an official deal with the Jordan Brand. He revealed this bit of info in an interview with the basketball website SlamOnline.com.

“Yes, I’m an official Jordan athlete and I’m very proud of that,” Bradley said. “I’m the first golfer to be with them. It’s funny, nothing I’ve ever done in my career, on or off the golf course, has caused as much of a stir as me being with Jordan Brand. It speaks to how much people care about him and the shoes.”

Entering the golf space seems a logical move for the Jordan Brand, which already exists in basketball (obviously Jordan’s best sport) and baseball (his second pro sport). Golf was always a known love for Jordan during his playing days, and Bradley even credits him with making golf appeal to more people.

“I think it’s really Michael and Tiger (Woods) that made golf cool. I don’t think I’ve ever met anyone who liked golf more than Michael Jordan,” Bradley told SLAM, adding, “He is a golf fanatic. He only plays 36 holes at a time. When we’re both in Florida at the same time I play with him every day. It’s an incredible thrill to have become friends with him and to get to play with him.”

What’s an even bigger thrill? Beating Michael Jordan – even if you give him nearly a dozen strokes.

“When I play him, I give him 11 shots, and we have great matches,” Bradley said. “He wins sometimes, and I win sometimes. I have to say, there is no better feeling than to beat Michael Jordan in anything, golf included.”

About their golf battles, Bradley also once said that Jordan is “the easiest money I’ve ever made.” Looks like Jordan instilling more confidence in Bradley has been a success, especially when playing against Jordan. And now Bradley can always look down at his shoes to remember that cockiness during pro events.