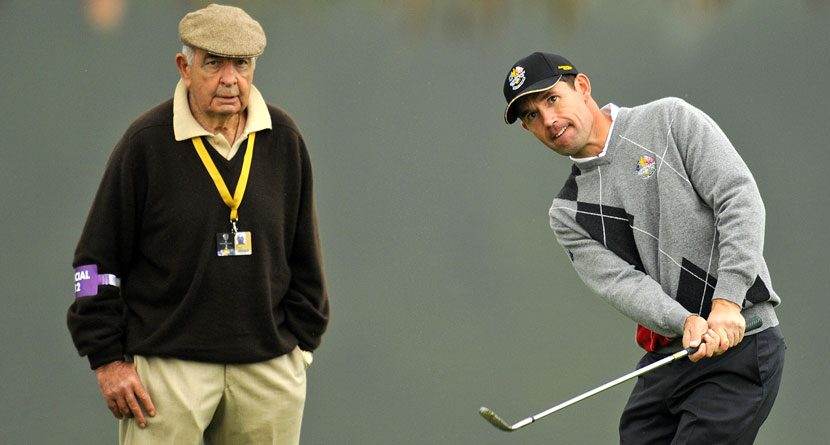 I was 14 years old and had entered the West of Scotland boys’ championship at Strathaven. Back then, you didn’t know who you were partnered with until you got to the course, and when I stepped onto the first tee, I was introduced to a strapping man child who looked like he had turned up for the wrong tournament.

He was immaculately dressed and when he took his first practice swing, I knew that I was in for a long, hard day playing catch-up. His name was Sam Torrance, he hit the ball miles and he took the course apart that day, signing for a 67.

Until that day, I had fancied myself as a half-decent young golfer, but when I watched Sam strike the ball I realized that I was no such thing.

Growing up, my grandfather had taken me to watch many original Tartan Tour events around Scotland. These attracted some giants of the Scottish game. There was Eric Brown, the fiery Edinburgh man with the volcanic temper. Brown captained Great Britain and Ireland in the Ryder Cup and gave instructions to his players not to help the Americans look for their golf balls.

There was Ronnie Shade, one of the greatest amateur golfers Scotland has ever produced. He turned professional late in life and never achieved the things he should have done.

There was John Panton, the quiet man, who simply went about his business, hitting fairways and greens and holing putts … and picking up the winning checks.

And there was Bob Torrance. He was an unmistakeable figure, never without his white hat, just like the one Ben Hogan wore. Torrance would figure on the leaderboards from time to time, but as a golfer he set himself impossibly high standards, just like Hogan. He, too, had a tendency to blow his top when things weren’t going his way and he was never going to make a living as a tournament player.

Torrance was Sam’s father and he was responsible for building the boy’s swing and guiding him through a career that saw him win 21 times on the European Tour, play in eight Ryder Cup events, hole the putt that won the Ryder Cup at The Belfry in 1985 and captain the team to a glorious victory at the same course in 2002.

Bob Torrance, who died Friday at the age of 82 after a long battle with cancer, had found his niche. He was a natural teacher.

Sad day my dad just passed away peacefully in his sleep #reallygoingtomisshim pic.twitter.com/XWj6oLGe8F

In my early twenties, I decided that I needed a couple of lessons, so I took myself down to Largs, a small town on the west coast of Scotland. Torrance was the pro at Routenburn Golf Club, a short but challenging golf course.

He asked me what I wanted to achieve. “Consistency,” I replied. “Come on then son, let’s see you hit some balls.”

An hour later, he had me striking the golf ball as crisply as I had ever done in my life. Unlike so many of today’s teachers, Torrance did not have a set method. He looked at the player in front of him and tried to give him something that would work for him.

He had a reputation as a gruff individual — he was anything but. His teaching style was to gently cajole, and to encourage when it all came right. I went back for a couple more lessons and was flying by the end of it.

If he could do that with me, what could he do with a proper golfer? Well he coached Padraig Harrington to three majors for starters. The Irishman described Torrance as the best coach he had ever worked with.

He also transformed several other players. When Marc Warren, the Scottish European Tour golfer, first went to see Torrance, he could barely hit the ball. The transformation was immediate.

“He changed my career massively. Still to this day, and for the rest of my career, his words of wisdom will stay with me,” Warren said. “When I first started seeing Bob it was 2002 and three months later I’d won twice on the Challenge Tour.

“I was rookie of the year and I won the World Cup. I might not be playing at this level if it wasn’t for him. I can’t speak highly enough of him and his knowledge of the golf swing. He would give everything he had to make you the best player you could be. I’ll be forever in his debt for that.”

RIP Bob Torrance. What a character. What a teacher. What a man. I loved him

Bob Torrance lived and breathed golf, a true gentlemen admired by all, he will be missed. Thoughts with June and Sam at this time #RIPBob

Really sad news Bob Torrance just passed away. An amazing man who coached so many great players. He will be missed. Bob #RIP

Very sad to hear the passing of the true golf coaching legend Bob Torrance today! Our best wishes and love to June&Sam at this time #RIPBob