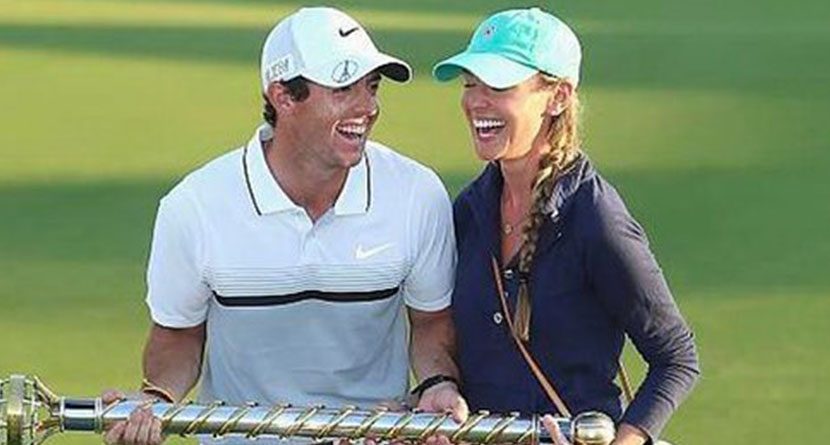 A small piece Rory McIlroy’s net worth now resides on the left index finger of girlfriend Erica Stoll, according to a report by The Irish Independent that claims the world No. 3 popped the question to Stoll on a recent visit to Paris.

While a spokesperson from McIlroy’s camp declined to comment on “speculation about (their) client’s personal life,” the understanding is that McIlroy’s post to Facebook and Instagram on Wednesday was the backdrop for the proposal.

The pair met at the 2012 Ryder Cup at Medinah when Stoll, then an employee of the PGA of America, arranged for a police escort to take McIlroy to the course for his singles tee time after he overslept. They have been dating since late 2014 after McIlroy broke off his engagement with his former fiancée, tennis star Caroline Wozniacki.

McIlroy seems to have a preferred style of proposing having asked Wozniacki to marry him in the Sydney Harbour under firework-lit skies. This time, McIlroy chose a different international landmark to ask for his girlfriend’s hand.

Neither McIlroy nor Stoll have commented publicly on the reported engagement.

On Thursday night at the Paddy Wallace Fund for Austism Christmas ball in Belfast, The Belfast Telegraph published photographs of McIlroy and Stoll with a conspicuous piece of jewelry on her left ring finger.

Rory McIlroy snapped with Erica Stoll – and she appears to be wearing a huge engagement ring pic.twitter.com/TH5YIKDJDp

And a closer look…

Erica Stoll & Rory McIlroy are engaged! What do you think about her stunning oval cut diam… https://t.co/EvEaeCpABf pic.twitter.com/Y7r2MZb7ij

According to the Telegraph, “Pals rushed to shake the golfer’s hand after he revealed that the rumours about the engagement were true.”