Return to Valhalla: Tiger Woods vs. Bob May 14 Years Later 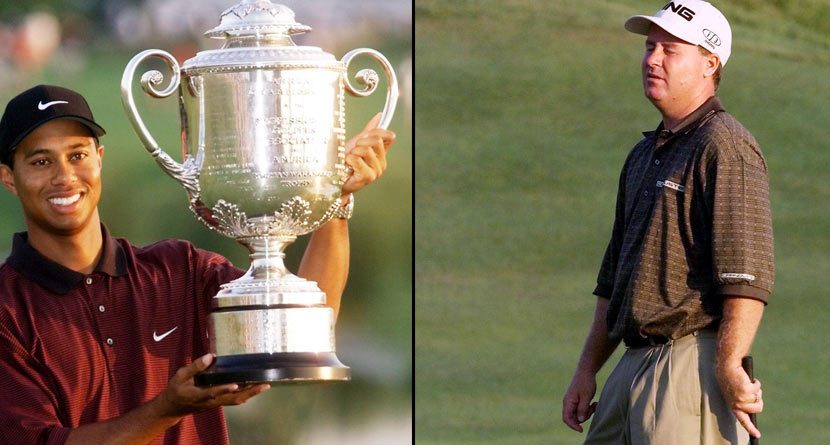 When the golf world descended on Louisville, Ky., and Valhalla Country Club for the 2000 PGA Championship, the sporting world was amidst the height of Tiger Mania.

In 2000, Woods had already collected six wins on the PGA Tour, including two majors: the U.S. Open at Pebble Beach by 15 strokes, and the Open Championship at St. Andrews by eight shots. He rolled into Valhalla looking for the third leg of what would become known as the “Tiger Slam” the following April in Augusta. Now it was clear that Woods’ three amateur titles were no fluke, that he was in fact the next big thing. His assault on golf’s record book had begun and it appeared there was no man who could go toe-to-toe with Woods.

Enter Bob May, the Oklahoma State product who had bounced around since turning professional in 1991. Coming into the 2000 PGA Championship at Valhalla, May had won just once as a professional — the 1999 British Masters — and never on the PGA Tour. Despite that, he had already had a quietly impressive 2000 campaign. He had a T-23 finish at the U.S. Open and a T-11 in the Open Championship. May was enjoying the best year of his career and had shot 66-66 on Friday and Saturday to set the stage for one of golf’s most epic showdowns.

During the final round, Woods and May exchanged hay makers all the way to the finish line. They both finished at 18-under, five shots ahead of the field, and each made birdie on 18 in regulation to force a playoff.

The first hole of their three-hole playoff, No. 16, proved to be the difference in the championship. After May’s second shot ended up in the thick rough and Woods stuffed his approach to birdie range, May hit one of the best shots you could hit under pressure. His chip landed and ran out to less than a foot, leaving him a tap-in to save par (4:35 mark):

Unfortunately for May, the machine that is Tiger Woods would not be denied. Woods read his birdie putt perfectly and after the stroke, famously ran after the putt, pointing it into the bottom of the cup. The birdie 3 ended up being the difference, as both combatants made good pars on the second and third holes of the playoff.

The 2000 PGA Championship left many shaking their heads. For Bob May, at what might have been, and the rest of the world in awe of the greatness they were witnessing. May said of his showing that Sunday, “Everyone has fallen victim to [Tiger Woods], but I was the first one to really stand up and challenge him.”

In the end, Woods claimed major victory No. 5  and the third leg of the “Tiger Slam.” Since then, Woods has claimed nine more major titles, giving him 14 for his career. May faded into the background, returning to the life of a journeyman pro. Plagued by injury, he last played consistently on the PGA Tour in 2007. May struggled on the Web.com Tour for a few years, last playing an event at that level in 2012. He currently owns and operates the Bob May Golf Academy.

May and Woods have spoken since the 2000 PGA Championship, sharing time at a gym in Las Vegas — but not about that Sunday.

“Maybe he would like to say, ‘Hey, Bob, wasn’t that a great deal?'” May said. “I would love to talk with him about it. But it’s hard for the winner to bring it up to the guy who lost. Do you really want to reminisce? But none of us were losers that day. He happened to beat me. I played the best I was able to play.”

Since then, names like DiMarco, Mediate and Yang have pushed Woods to the brink, with only Y.E. Yang coming out victorious. All of these duels will go down in history, but Bob May will always be remembered as the first to do so. The first everyman to stare the game’s greatest player in the eyes without blinking.