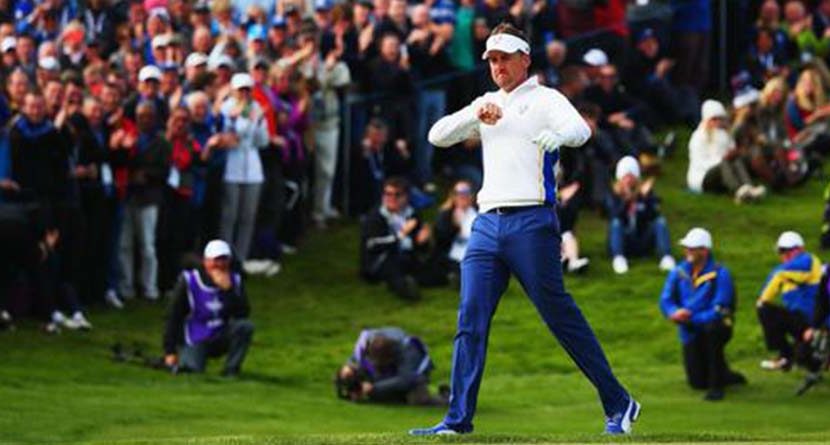 Less than a year out from the 2016 Ryder Cup at Hazeltine, the United States nearly avoided having to worry about the eye-bulging stares of Ian Poulter.

Not unlike the scheduling snafu that precipitated Martin Kaymer’s loss of PGA Tour status for the 2015-16 season, Poulter found out on Monday, Oct. 19 that he had fallen outside of the Official World Golf Ranking’s top-50 for the first time since September 2006.

No big deal, right? Wrong. Like many global stars of the game, Poulter holds membership on both the PGA and European Tours and is forced to set a schedule that requires he play in 15 PGA Tour-sanctioned events and 13 European Tour-sanctioned events. Spending the majority of his time stateside, Poulter played in 19 PGA Tour events and, prior to this week, 12 European Tour events. The requirements have their advantages and disadvantages as major championships and World Golf Championships are co-sanctioned events, thus limiting the number of starts players need to make on each Tour — four majors and four WGCs already mark off eight events on each circuit.

However, to qualify for each WGC including the HSBC Champions, which will be contested Nov. 4-8, one needs to fall into a certain category of winners, be a top finisher in an end-of-season series (FedEx Cup, Race to Dubai) or, you guessed it, be ranked in the top-50 of the OWGR. With Poulter outside the top-50 and just 12 events to his credit on the European Tour, the Englishman was thrust into scramble mode, not only to maintain his European Tour card, but also to be eligible for the 2016 Ryder Cup.

The European Ryder Cup team requires that its members be card-carrying European Tour players. Were Poulter to fail to play in the required amount of events, it was bye-bye Hazeltine, as first reported by The Telegraph. With his HSBC Champions qualification up in the air, Poulter needed to get into this week’s Hong Kong Open to ensure he met his requirements, but it’s not as simple as just chartering a NetJets and flying to Asia. Players must register two weeks prior to playing or be forced to take up a sponsor’s exemption. As the event begins Thursday, those exemptions had all been given out.

Enter 2002 PGA Champion Rich Beem, an American who won his major at the site of the 2016 Ryder Cup. These things can’t be written more perfectly.

Thanks to @beemerpga for giving up his invitation to allow me to play in Hong Kong. Where would you like me to take you for dinner.

Now, with a spot in the tournament and a plane at the ready, Poulter still had to jump through some diplomatic hoops to make sure his papers were in order. And just in the nick of time, Poulter’s passport and visa arrived less than two hours before his plan was scheduled to make the 19-hour flight.

That’s what you call cutting it fine, passports arrived 7.15am, taking off at 9am to make flight to Hong Kong. pic.twitter.com/JmeVITEvLn

Beem, who hopes to be a part of the Ryder Cup at Hazeltine given his membership at the club, may get a few sideways glances should Poulter be able to make the European Team and recreate the magic he produced in Ryder Cups gone by. Then again, if Poulter keeps up the form that saw him go 0-1-2 at the 2014 Ryder Cup and has since dropped him from the top-50 in the world, maybe Beem deserves more credit from the US for making sure a beatable opponent gets on the team headed to Minnesota.