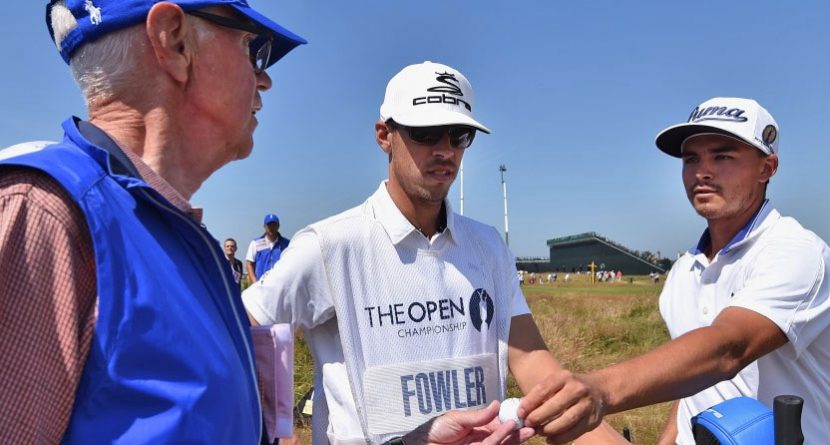 Bill Davies is the president at the Vicars Cross Golf Club, which sits 30 minutes down the road from Royal Liverpool Golf Club, where the 2014 Open Championship is being played. But this week he’s serving as one of the course marshals for the major tournament. What a gig.

He was assigned the 16th hole, a 577-yard par 5, the longest hole on the course. With all the room for the players to work with, you’d think Davies would be safe standing just about anywhere along the fairway. You would be wrong.

Davies was pelted in the leg by a ball off the club of Rickie Fowler. The marshal said the player was more interested in where his ball was lying, but Fowler apologized to him upon realizing he’d hit the man. He then signed a ball for Davies: If that wasn’t enough, four groups and less than an hour later, Davies was struck on the shoulder with another ball. This one came from Charl Schwartzel, and resulted in another signed memento. Both players went on to make birdie, perhaps as a result of favorable lies after sending shots into the marshal.

At least Davies didn’t get smacked in the head with an errant drive from Tiger Woods.

Surely those balls hurt and Davies would rather not be target practice, but at least he can go back to his home course with two autographed souvenirs. That is, as long as he stays in the clear the final three days of the tournament.

Here’s the trooper discussing the incidents with BBC Radio: