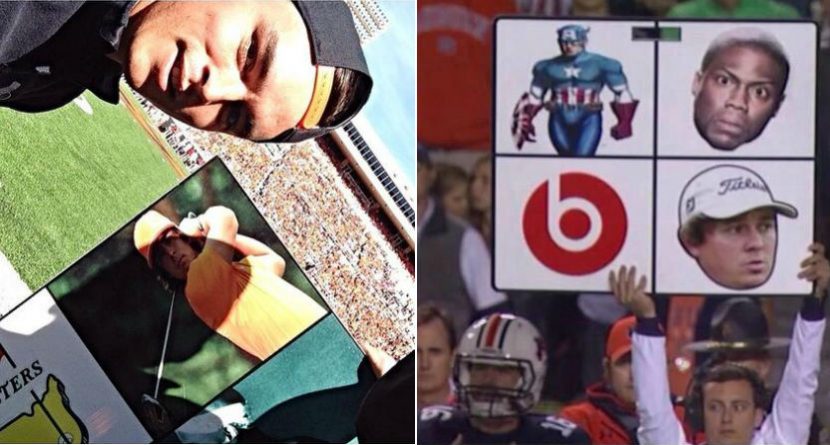 As a professional golfer, at what point is it confirmed that you’ve made it big? Make the PGA Tour? Win a tournament? Earn $15 million lifetime? Win a major? Win multiple majors?

Nope. All you have to do is wear clothes so flashy that golf fans of all ages want to mimic your look, or unintentionally start an Internet phenomenon. (Well, and be really good at your sport.) Those are the things for which Rickie Fowler and Jason Dufner, respectively, are most famous, and both golfers officially went big time this past weekend.

Their faces appeared on the play calling cards of their respective alma mater’s football team.

While back in Stillwater, Okla., Fowler watched the No. 21 Oklahoma State football team take down Iowa State on Saturday. While standing on the sidelines, he found himself:

The fact that Fowler represents OSU by famously wearing orange on Sundays in tournaments certainly helped his popularity rise to a level at which his likeness is easily recognized by the school’s football players. Then again, maybe they have no idea who he is and his picture is just a decoy on those cards.

Whatever the meaning behind the pictures, Dufner’s face popped in similar fashion on Saturday night while No. 5 Auburn was crushing Louisiana State. It doesn’t appear that he got an up-close look at his image on the sideline like Fowler, but showing up on national TV is just as thrilling. Dufner’s mug was a part of a card that included Captain America, Kevin Hart, and the Beats by Dre logo:

This makes more sense, because Dufner might be the biggest Auburn fan around, or at least the biggest college football fan among his fellow golfers. He’s spoken to the team before and has been honored with his own street in Auburn. He’s also earned more than $17.2 million in his career and won three times on the PGA Tour, one of which was a major championship.

But Fowler proves that winning at golf isn’t always what makes golfers popular. He’s earned just more than $15.2 million in his career and has just one PGA Tour win to speak of, and it wasn’t a major.