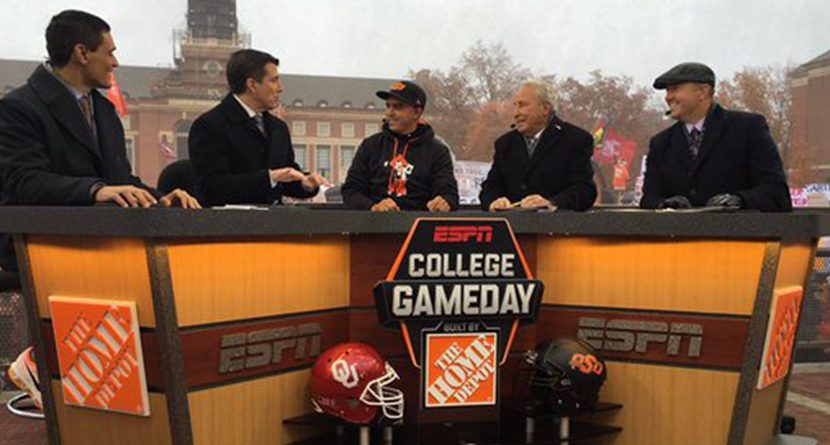 Each week in the fall on a different campus around the country, ESPN’s College GameDay comes to town to preview a marquee match up and preview the day’s slate of games. This past weekend the GameDay bus rolled into Stillwater, Okla. and onto the campus of Oklahoma State University for the annual Bedlam Series between OSU and Oklahoma University.

The normal analyst crew of Lee Corso and Kirk Herbstreit, along with host Rece Davis, traditionally welcome in a special guest with ties to the home school for the final segment of the show to pick the winners of big games across the country. Rickie Fowler, who famously played for the Cowboys for two years, outgunned (pun intended) big names like Garth Brooks, T. Boone Pickens and Barry Sanders for the coveted spot on the dais.

Fowler’s slate of games included 11 picks and often made ties to friends he has on the professional circuit. The reigning Players Champion called out Tiger Woods, Jason Dufner, Michelle Wie, Bubba Watson and Dustin Johnson’ brother and caddie, Austin over the course of his picks, some influencing his choices while others were made to keep up a healthy rivalry.

Fowler would go on to pick 7 of the 11 games correctly, but his biggest victory was getting off the set unscathed after Lee Corso doubled down on Fowler’s pick of an upset for Oklahoma State.

Fowler returned home to Florida later Saturday evening and he will be in the Bahamas later this week to compete in the Hero World Challenge at Albany.