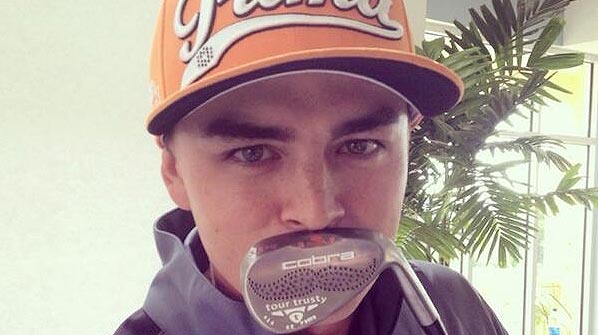 Rickie Fowler hasn’t grown a mustache of note for a couple years now, but his new Tour Trusty Cobra wedge is now sporting a magnificent one.

Could it be in honor of the faux ‘stache worn by golf-course enforcer Dick Fowler, P.I.?

Or is it Cobra’s and Fowler’s way of participating in Mustache March? Though we’re not really sure what it is, Mustache March is a thing.

According to Air Force Times, “Mustache March is an Air Force tradition that dates back to the Vietnam War. The legendary triple-ace fighter pilot Brig. Gen. Robin Olds sported an equally legendary mustache during that war — extravagantly waxed, grown in flagrant defiance of military regulations, and said to be ‘bulletproof.’ … Over the years, some commands have — officially or unofficially — held contests during March to see who could grow the best mustache as a morale-boosting exercise.”

Or according to MoustacheMarch.com, “Moustache March was founded in 2003 by a group of friends, [and] it really took off for us in 2005 when several of us end[ed] up working for the same company in Wilsonville, OR. Since then we have gone our separate ways but have done our best to keep the dream alive. Each year we have expanded our reach, trying to group up with all the other pockets of men around the world that have decided Moustache March just makes sense.”

Their mission doesn’t really make sense, so we’re going with the Air Force tradition. And if Fowler was allowed to enter, his wedge may win the contest.