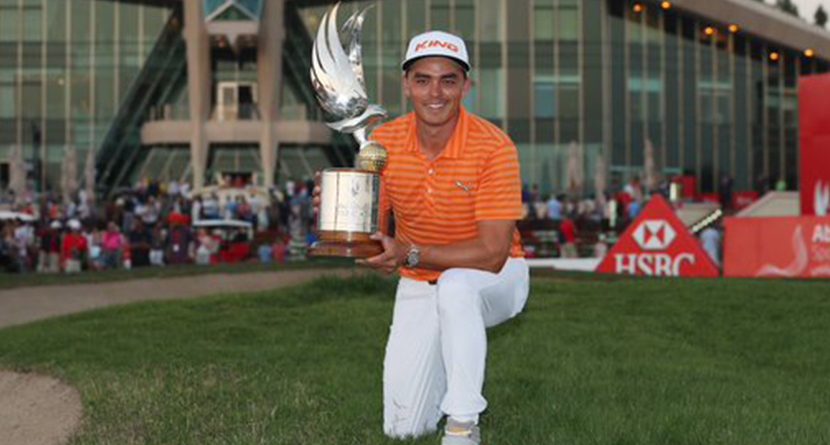 Coming into Abu Dhabi, Rickie Fowler was portrayed as the third wheel in the official 2016 jump off of the Jordan Spieth-Rory McIlroy rivalry. However, when the dust settled in the desert on Sunday evening, it was Fowler who was hoisting the famed Falcon Trophy, not Spieth or McIlroy.

The win was Fowler’s fourth in the last eight months, a stretch that started with his breakthrough win at the Players Championship and included victories at the Scottish Open and Deutsche Bank Championship. The Abu Dhabi HSBC Championships was just the latest win for the 27 year old in pressure-packed tournament with a star-studded leaderboard.

After a persistent fog threatened to sully the event, a marathon Sunday looked a little more than a formality when Fowler opened up a four-shot lead through six holes. However, a double-bogey on the seventh hole unearthed memories of Martin Kaymer’s collapse from the 2015 event. Quick to regain control of the event, Fowler reached the greenside bunker of the par-5 eighth in two.

Playing solidly but not spectacularly down the stretch, Fowler had to sustain charges from Thomas Pieters, Henrik Stenson and, of course, McIlroy.

In a bit of scripted theater, almost immediately after McIlroy’s eagle putt dropped, Fowler had his championship moment a few hundred yards away on the 17th hole.

With McIlroy in the clubhouse at 14-under and Fowler at 16-under, Pieters (-14) needed an eagle on the final hole to catch the leader, but it was not meant to be. A closing birdie earned the Belgian a solo second-place finish.

For  Fowler, the win moved him into fourth place in the Official World Golf Rankings and freshened a still-flickering flame as it comes to anointing the top tier of the game as a Big Three or Four or Seven. While there are still those who condemn Fowler for a lack of major championship success, there is no question as to whether he deserves to be in the conversation as one of the best players in the game.