Major Mulligan: What If Rory & Caroline Didn’t Break Up? 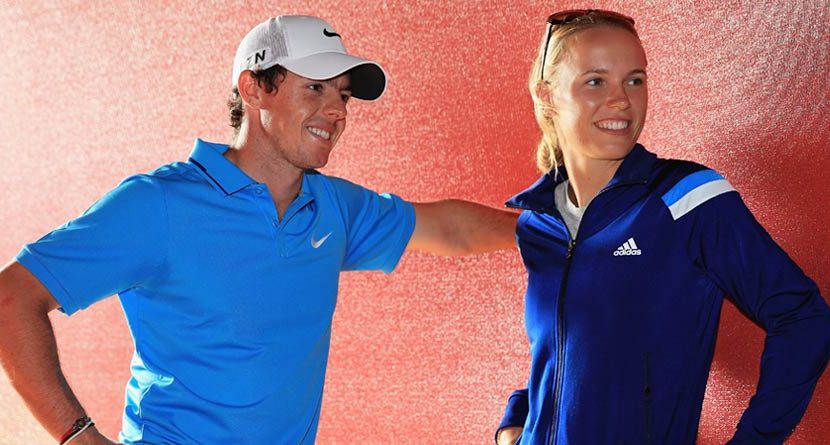 There are many reasons why this summer is much, much different (and better) than last summer for Rory McIlroy. He’s now in year two with his Nike clubs. He doesn’t have any drama going on with his management team.

Related Link: Rory vs. Rickie: Will McIlroy-Fowler be Golf’s Next Great Rivalry?

But the most obvious reason is his relationship status. He’s no longer traveling all over the world to see tennis star Caroline Wozniacki, and he alluded to as much Friday, in the middle of the PGA Championship, which he would go on to win.

From the UK’s Daily Mail:

Asked once more why it had all gone right, this time he gave a particularly candid response. He did not say or mean it unkindly, but he did pinpoint the moment he ditched his tennis-playing partner.

“I think what happened has been for the better in terms of my golf,” he revealed. “I’ve put a bit more time into it and it has refocused me. I mean, what else do I have to do now? I go to the golf course, I go to the gym and it’s just my life at the minute.

“I worked pretty hard before but the past couple of months I’ve really just buried myself in my game. It obviously works pretty well, so I am going to keep doing it.”

So let’s play the “what if” game, shall we? What if sending out wedding announcements hadn’t given McIlroy a sudden change of heart? What if he was ready to spend the rest of his life with this woman he loved? What if Wozzilroy stayed together, continued flying all over the world to spend time with each other, and thus, McIlroy wasn’t afforded all day and everyday to work on his golf game?

Well, for starters, Shane Lowry might have won the BMW PGA Championship. He lost to McIlroy by a stroke in the European Tour’s flagship event, which took place just days after McIlroy called off the wedding. It would have been the biggest win of Lowry’s career. Instead, McIlroy’s play experienced a shockingly quick uptick upon him being a newly single man.

And were it not for the Wozzilroy split, Rickie Fowler might have two majors, just as many as McIlroy. We might be talking about the “Rickie Era” instead of the “Rory Era.” Rickie probably would have watched his number of Twitter followers soar past 1 million instead of Rory’s eclipsing 2 million.

Fowler was runner-up at the Open Championship and placed third at the PGA Championship. If you take McIlroy out of the picture at The Open, Fowler and Sergio Garcia would have gone into a four-hole playoff after going 15-under, two better than the rest of the field. And it’s easy to envision Fowler emerging victorious considering Garcia doesn’t think he has what it takes to ever win a major.

As for the PGA, if you take away McIlroy and his two-shot lead on 18, Fowler stands over his short birdie putt on the 72nd hole just a bit longer. Instead of rushing and missing it because he had already missed the eagle he needed to tie McIlroy, Fowler takes his time and rolls in the birdie to keep him tied for the lead with Phil Mickelson.

Darkness was quickly falling on Valhalla, so there was no time on Sunday for a three-hole playoff. That means Fowler and Mickelson would have been back out on the course Monday morning. Considering the 44-year-old Mickelson said he ran out of gas during his final round, it’s easy to envision the spry 25-year-old Fowler resting and recovering better for a fifth day.

That’s two majors for Fowler, coupled with a T-2 at the U.S. Open and T-5 at the Masters (where McIlroy, still dating Wozniacki, was a non-factor). That’s one of the greatest seasons in the history of golf. From one top-five major result in six years to four such finishes in one season, including two titles.

How many majors will Fowler end up with? Can he catch Arnold Palmer? What about Tiger Woods? Could the new sensation actually challenge Jack Nicklaus’ record of 18?

We can only wonder. And we wonder if Fowler – and/or many other tour pros – might soon be trying to get McIlroy and Wozniacki back together.