Rocco Mediate: I Tossed My Tiger Woods Autograph In The Trash 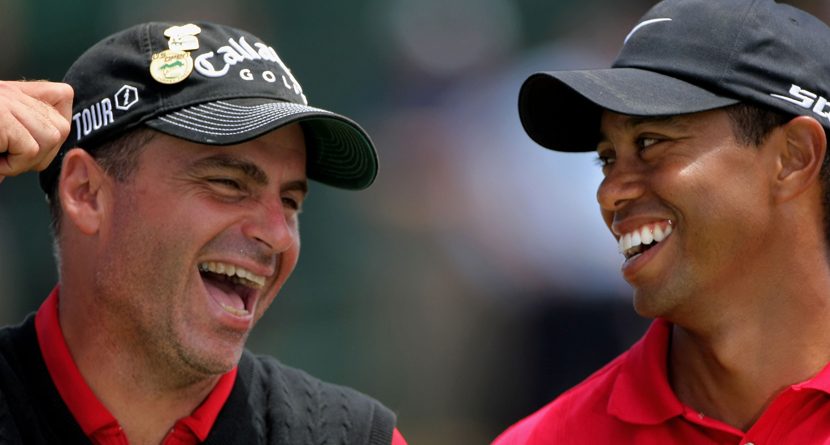 One of the greatest sports memories we have is watching the dramatic finale to the 2008 U.S. Open. You know, the head-to-head battle that ensued between Tiger Woods and Rocco Mediate during the 18-hole Monday playoff.

Woods ultimately beat Mediate by one stroke in a sudden-death playoff after the original playoff.

The lasting image from that historic day was on the 18th green following Woods’ victory. Both men were looking at each other, smiling and laughing, with Woods holding his trophy (it’s the big photo above this article). Mediate, who had absolutely zero pressure on him the entire weekend, admitted he was just glad to be in contention for the victory.

Fast forward to the Players Championship one year later.

Mediate had snagged the photo of the two on the 18th green, so he left that, along with his pin sheet from the 18-hole playoff, inside an envelope in Woods’ locker at the tournament. He asked Woods to autograph both and write a little note on the photo. Both would someday find a spot on his wall at home.

According to an interview Mediate did on Feherty, Woods didn’t exactly follow the instructions.

“I open it up, take out the pin sheet, nothing. Take out the picture, [it says] ‘Tiger Woods.’ That tells the story,” he told David Feherty. “Why wouldn’t he just go, ‘Rocc, you suck, you got lucky for six days. I had a broken leg.’ Just mess with me. And then sign my pin sheet, so I can put the damn thing on the wall and say, ‘Almost got the guy that day.’”

Despite getting short-changed, Mediate said he’s still a huge fan of Woods.

We’ll stay out of it and remain neutral, but this does bring more validity to Sergio Garcia’s claim that Woods is not the nicest guy on the Tour.