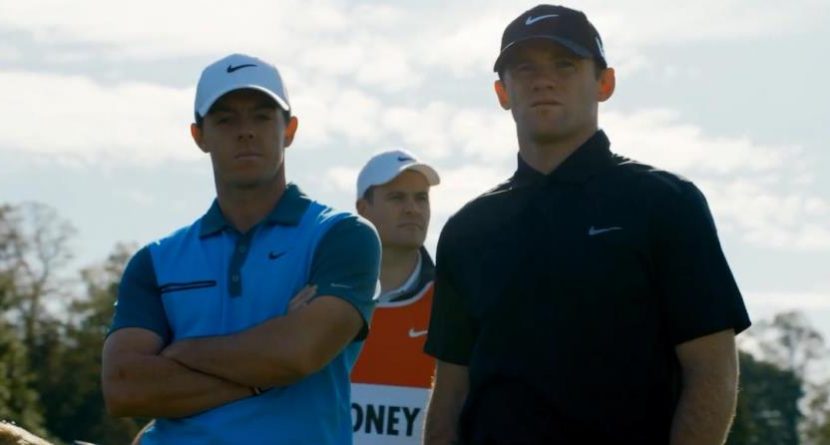 Rory McIlroy caused a minor hubbub back at the end of September when he didn’t attend the wedding of good pal and fellow Northern Irishman Graeme McDowell. McIlroy’s absence was a result of him shooting a Nike commercial in the UK with soccer star Wayne Rooney.

We now have the product of that collaboration, a wonderful ad released by Nike on Monday:

McIlroy may be able to knock off Tiger Woods in a one-on-one duel, and take out Adam Scott in the Aussie’s homeland, but fending off Rooney with the new Nike Ordem soccer ball is too tall of a task. Especially when Rooney’s errant shots are bouncing nicely off Brazilian legend Ronaldo’s head and onto the green.

We hope another ad is on the way, and that might be the case after seeing some behind-the-scenes video that was also released by Nike. McIlroy shows off some nice soccer juggling skills, but struggles to hit a soccer goal crossbar with a golf ball (who wouldn’t?):

As part of the promotion, the megastars also engaged in a staged Twitter battle:

Nice cross-sport promotion by the creative folks at Nike, and another solid appearance for McIlory. The spot was almost as good as his “No Cup Is Safe” commercial with Woods: