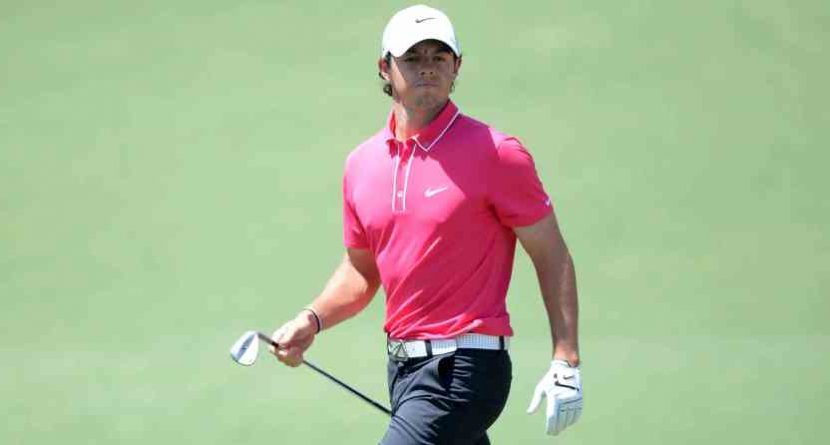 Recent results suggest Rory McIlroy‘s game is back on the upswing, and that may be a result of the 24-year-old eliminating the distractions surrounding him.

The former world No. 1, who currently sits at No. 6, failed to qualify for the PGA Tour Championship, so took some time off to build up for a strong finish to the year. After about six weeks off, he placed a decent 27th at the European Tour’s BMW Masters, then bested top-ranked Tiger Woods in their one-on-one duel, “The Match at Mission Hills.” Later that week, McIlroy finished sixth at the WGC-HSBC Champions.

That last result pushed him into the top 60 on the European Tour, which qualified him for the DP World Tour Championship this week in Dubai, that tour’s season finale. McIlroy spoke to the media on Tuesday like a man feeling some weight being lifted off his shoulders.

The distractions in 2013 for McIlroy have been many. Critics near and far suggested that his multi-million dollar contract with Nike, and the subsequent switch to a bag full of Nike clubs, was to blame for his fall from the top ranks. Then there were rumors surrounding his relationship with tennis-playing girlfriend Caroline Wozniacki. And behind it all, McIlroy was unhappy with his management company. He eventually left Horizon Sports to start his own firm, but is still dealing with the legal ramifications of splitting from Horizon.

“So I have got people dealing with that. But it’s something, as I said, that shouldn’t be in my mind. It’s something that I don’t really think any athlete or anyone should ever go through. I have seen more lawyers offices and more lawyers this year than I care to see in my entire life. It’s not something I ever want to go through again and I’m making sure that I won’t ever go through it again,” he said.

McIlroy went on to discuss his struggle with the high demand from outside sources on his time due to his rise in popularity, and he said he had to remember what got him there in the first place: dedication to practice.

“It’s something that Tiger actually told me last year. He said, ‘You have to remember what got you here in the first place,’ and I think you guys [in the media] know, with Tiger it is ‘no’ 99 percent of the time, which is a good thing. It’s what he needs to do to be the player that he is and to have the career that he has had. If that works for him then that’s great. I’d say I’m a little more forgiving with my time than that but there still needs to be a point where you say ‘no,’ and look after yourself.”

After Dubai, McIlroy will head Down Under for the Australian Open, and close out 2013 with an appearance in the Northwestern Mutual World Challenge in California, an event hosted by the Tiger Woods Foundation.