Rory McIlroy Dishes on How He Proposed to Caroline Wozniacki 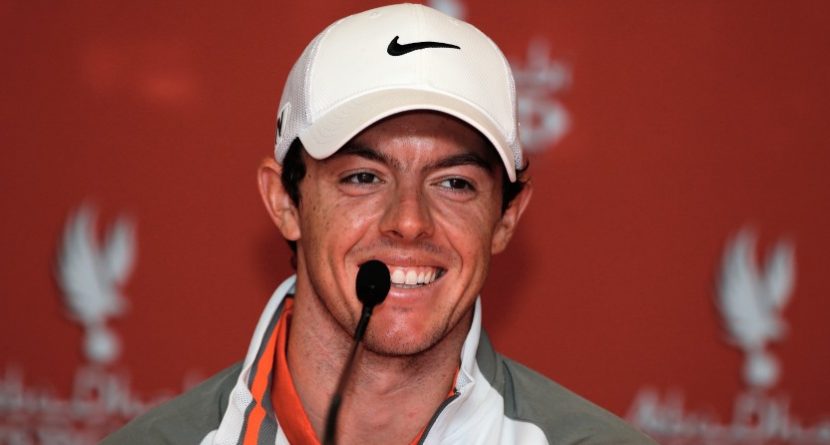 Last year was a tumultuous one, to say the least, for Rory McIlroy, but he ended it with a victory at the Australian Open in early December. That gave him a bit of momentum heading into the new year, which, as far as golf is concerned, he commences this week at the Abu Dhabi HSBC Golf Championship.

So the first topic the moderator brought up as the world’s seventh-ranked golfer met with the press this week was … his engagement to tennis star Caroline Wozniacki. And she couldn’t even avoid the question as she competes in the Australian Open:

McIlroy shed some light on the proposal.

“I was always going to do it on New Year’s, but we weren’t actually expecting to be in Sydney,” McIlroy said. “I thought we were still going to be in Brisbane. But Caroline had to pull out (of the Brisbane International) with a shoulder injury, and then thought it would be nice to spend New Year’s in Sydney. And we were out on a boat in the harbour for New Year’s and fireworks and stuff.”

The conversation turned back to golf, but before long, he was asked for more specifics on the proposal. “Did you drop a little romance on her? How did you pop the question, and was she surprised?”

“Yeah, we were out on a boat in Sydney Harbour for New Year’s Eve, and (there were) fireworks and (we were) just in front of the Opera House,” McIlroy said. “Yeah, I guess there was a little bit of romance involved. And yeah, she was surprised. I had an idea that it might have been what she wanted or it was something that she would say yes to I guess; I hoped she would say yes.”

Follow-up questions ensued. “Were there other people on the boat? Did you drop to a knee so people probably saw this happening?”

“Yeah, it’s a funny story. It’s too long to go into but yeah,” McIlroy said.

“No, I’ll keep that between us,” McIlroy said, smiling.

As for McIlroy’s golf in Abu Dhabi, he completed his first round Thursday with 2-under-par 70, three shots off the lead.