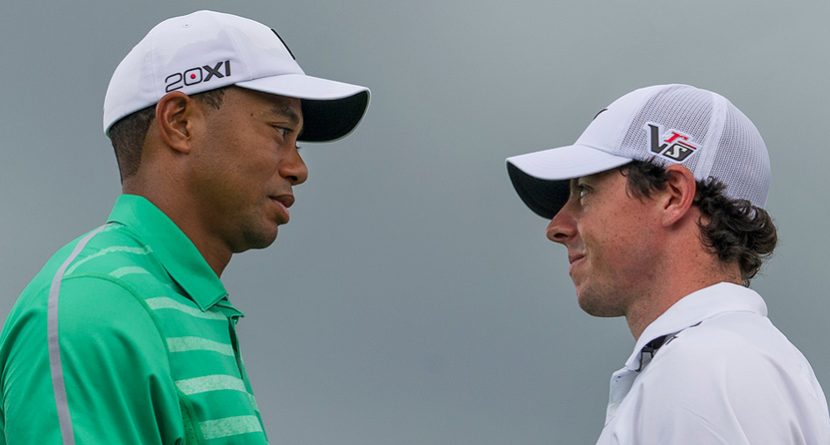 Rory McIlroy may not have won a tournament all season, but he fended off world No. 1 Tiger Woods in their one-on-one duel – The Match at Mission Hills – on Monday. As it did in 2012, the event came down to one stroke.

Arriving at the 17th hole all square on the par-73 Blackstone Course at Mission Hills Golf Club in Haikou, China, Woods watched as his par putt stopped on the lip of the cup. When McIlroy subsequently sank his for par, he regained the lead for the first time since the third hole. Woods had an eagle putt on 18, but it ran right and never threatened. He managed birdie, but after McIlroy’s eagle putt nearly dropped, he easily made birdie too. That gave the 24-year-old a 6-under-67, and his second consecutive victory over Woods in China.

Trying to stir things up in good nature afterward, Back9Network’s Ahmad Rashad asked if two straight wins meant domination for McIlroy. The Northern Irishman turned to the greatest player of this generation and said, “I beat you by one shot twice. You schooled me this year.”

That is true. Woods won five PGA Tour tournaments and was voted Player of the Year by his peers. McIlroy began 2013 at No. 1 in the world, but struggled mightily and dropped to No. 6 by season’s end. He aims to finish out the calendar year with a few more strong performances like the one at Mission Hills. McIlroy jumped in front from the get-go, seemingly the result of playing tournaments each of the past two weeks. He birdied the first two holes to take a two-stroke lead.

On the third, Woods commented that he was “rusty,” not having played competitively since the Presidents Cup three weeks ago. After his first drive of the day sailed into the gallery on the left, he jokingly asked his caddie, “Is that in the lava?” And Woods was battling a head cold obtained from one of his children; he chewed on cough drops throughout the round.

“I don’t have a good feeling for where this is going,” Woods told Rashad while walking the third fairway.

But on his very next shot, Woods stuck it 20 feet left of the pin, then nailed the birdie putt to pull within a stroke. He sank another birdie putt on No. 4 to draw even, and left No. 5 with a two-stroke lead despite making par. McIlroy lipped out his par putt and rushed his bogey putt, quickly giving him a double bogey. But they got back to level on No. 6 with a McIlroy birdie and Woods bogey. The chatter between Woods and McIlroy was light all day, ranging from their latest experiments with equipment to travel plans to the NFL. And their play picked up on back nine.

Woods shot a 35 on the front for a one-stroke edge, and he looked to gain a bigger cushion after an eagle on No. 12. Woods’ approach shot clipped a tree branch but stopped on the green. However, he then watched as McIlroy nearly holed his approach. “Hell of a shot, dude,” Woods told McIlroy. They both sank eagle putts.

On 13, Rashad asked Woods, “What part of your game is really good right now?” Woods responded, “Nothing … This is rusty.” McIlroy took that as a slight insult. “That’s making me feel real good,” McIlroy said sarcastically. “I’m one behind.”

He would pull even on the next hole, stopping his approach shot seven feet from the cup. Woods left his birdie putt short, but McIlroy did not, so things were knotted at 4-under with four holes to play. Both guys attempted to drive the 300-yard, par-4 16th, but sent their drives left. Woods’ ball stopped on the edge of a bunker – neither player found sand or water all day – and a nice chip to one foot made birdie certain. But McIlroy came up with a clutch birdie putt of his own to stay level.

McIlroy thought he could drop another stroke on 17, and he wasn’t happy when his birdie putt rolled right. But thanks to Woods’ mishap on his par putt, McIlroy gained the stroke he needed. After the two chatted following every hole while walking to the next tee, Woods took off toward 18 alone.

But in the 18th fairway, Woods showed no anger and resumed chatting with McIlory. They went shot for shot to close out the round, and Woods couldn’t hold back a smile as he congratulated McIlory on the win. Both players wanted to win, but the mood was chill all day.

“We had a lot of fun,” Woods said afterward.