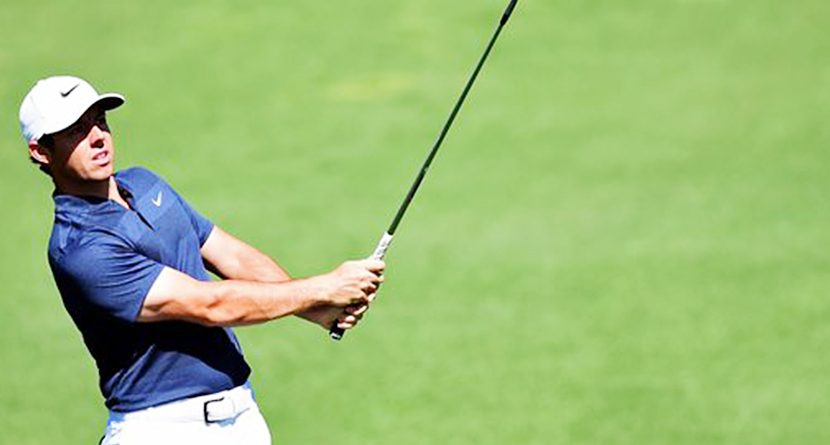 Rory McIlroy made news last week when he revealed that he wouldn’t be playing in the annual Wednesday Par-3 Contest at this year’s Masters. The world No. 3 called the family affair a “distraction” and a “hassle;” something he didn’t want to concern himself with as he tries for the second time to complete the career grand slam.

McIlroy is also taking his practice rounds very seriously this week. Instead of playing multiple balls and hitting short-game shots from around Augusta National’s tricky greens, the four-time major winner is taking a page out of Jack Nicklaus’ book and playing one ball all the way round the course. The thinking is that he will get a better idea of what to expect in competition this week having spent the week trying to score well because he had done his prep work in advance.

Playing a Monday practice round match against Chris Wood, McIlroy shut the door emphatically on the Englishman, winning the match on the iconic 16th hole. The Press Association has the details:

McIlroy, who is looking to become just the sixth player to complete the career grand slam by claiming a first green jacket this week, holed out with a seven iron from 170 yards to complete a 3&2 win in his match against England’s Chris Wood.

“I don’t think I have ever heard a roar that large in a practice round,” four-time major winner McIlroy said of the reaction from the crowd. “It was great. It was a nice practice round and a bit of a highlight. And it ended the match as well.

“I played well. I feel like my game is in good shape. We both hit just one ball [off the tee]. It gets me into a nice mindset of this is how I’m going to play, so I’m going to try to do the same tomorrow, play 18 and a match with someone.

“I feel that’s the best way for me to prepare. It’s competitive. You’re trying to shoot a score. The pins aren’t in the spots where they are going to be at the weekend, but at the same time you still have to get the ball in the hole and hole putts that you feel a little bit of pressure on.”

Why play the Par-3 Contest? There’s plenty of aces to be had on the big course.

We’re still waiting for our first ace on 16 via the famous skip shot a la Vijay Singh and Martin Kaymer.