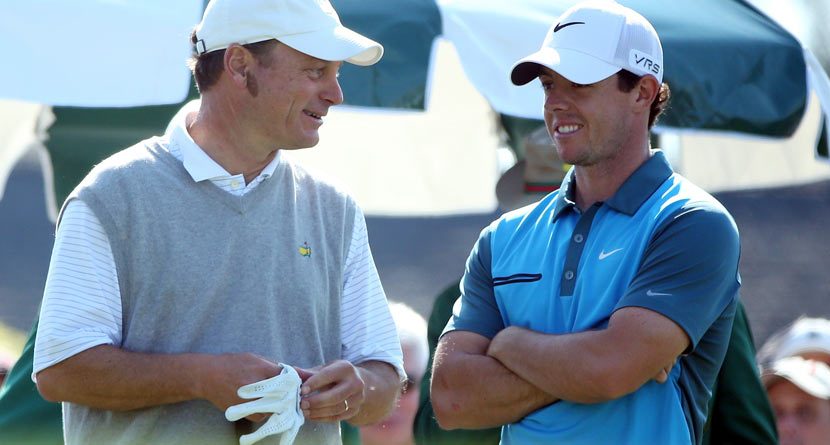 Now that the dust has settled on the 143rd Open Championship and Rory McIlroy’s celebrating has died down a bit, he’s already looking forward to the Masters in April and the chance to complete the career grand slam.

You may recall, McIlroy shot a third-round 71 this year at Augusta. His playing partner and non-competeing marker, Jeff Knox, beat him by one that day.

Now just a Masters victory shy of the career grand slam at 25 years old, McIlroy is seeking the expert advice of the man who beat him that Saturday in April. The three-time major champion sent a letter to Augusta National asking if Knox would be interested in playing a practice round before the 2015 Masters.

“I’ve always been comfortable from tee to green at Augusta,” McIlroy said. “What really helped me last year was playing with Jeff Knox in the third round. He’s my amateur marker and he’s the best I’ve ever seen on Augusta’s greens.”

As you might imagine, the comments took Knox by surprise.

Despite his deflection, Knox is no slouch. Not only is he a member at Augusta National, he also holds the course record of 61 from the member’s tees. From the tips, his best is a 69. Since 2003, he’s been the playing marker in the event when an odd number of players make the cut. Since then, McIlroy isn’t the only star he’s taken down. Rumor has it Knox took money from Sergio Garcia, out-drove Miguel Angel Jimenez, and has twice beaten 1982 Masters champion Craig Stadler.

With a record like that, it’s no surprise McIlroy would want his help.