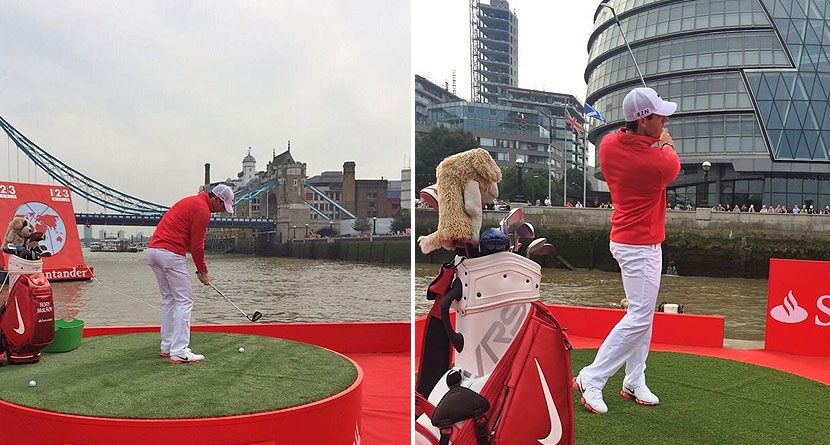 Being the No. 1 ranked golfer in the world has its perks, and Rory McIlroy is taking full advantage of them. He made stops around New York City with his buddy Tiger Woods in August, and on Wednesday, he was in London taking some target practice.

McIlroy was at Santander’s 123 World launch event where he hit balls on the River Thames to raise money for charity.

Coming up @McIlroyRory will be chipping from the pontoon to the world map #123World pic.twitter.com/oSqhWA5USO

He also sent five lucky winners on trips, which were based on where McIlroy’s ball hit on the map target.

5 winners will be jetting off on holidays up to £5000 depending on where on the map @McIlroyRory hits #123World pic.twitter.com/DRjwjQg1KZ

Congratulations to our #123World holiday winners – have a brilliant time! pic.twitter.com/Q4NhrqaUNp

Even Boris Johnson, the Mayor of London, stopped by to take a few swings, and McIlroy gave him a quick lesson.

Great to have a quick golf lesson from @McIlroyRory – wishing him & all of the @rydercupEUROPE all the best next week pic.twitter.com/VELsupY807