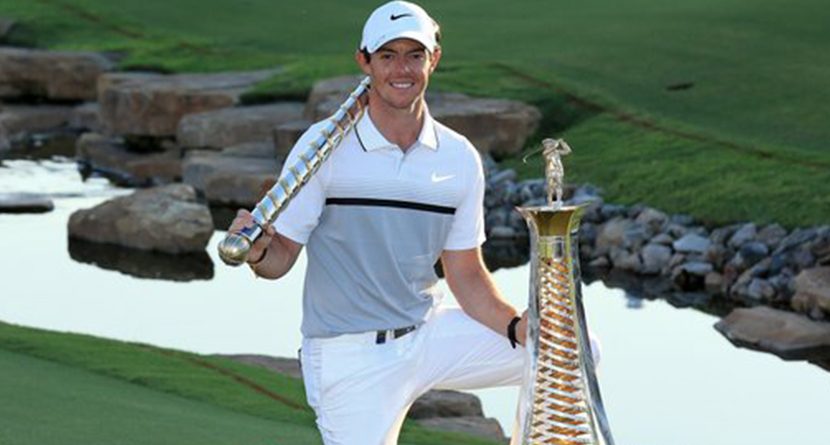 Rory McIlroy bulldozed his way to his third Race to Dubai title in four years, outshining a game Andy Sullivan on the back nine to win the DP World Championship by one shot.

Trailing by one heading into the final round, McIlroy’s deficit grew to three after four holes. However, over the next 11, the former world No. 1 played the stretch in 7-under par to take a two-shot lead into the final three holes. Sullivan, who matched McIlroy’s outgoing 33, could only muster one birdie on the incoming stretch, but was nearly back in control on the 17th hole when McIlroy made his worst swing of the week.

Playing the par-3 penultimate hole, McIlroy inexplicably fanned his 6-iron some 30-40 yards right of the target, finding a watery grave. From the drop zone, McIlroy hit an indifferent approach from 140 yards to 30 feet.

“It’s probably the longest putt I’ve ever made for a bogey,” McIlroy said afterward. “I don’t think there’s been one that’s ever came at a better time, so that was definitely the best bogey of my career.

“The tee shot was 40 yards off line. It was just a horrendous golf shot. I didn’t like the shot and I wasn’t very happy with myself but I was able to get over it quick enough to hole that putt. It seems like the more pressure I’m under or the more it means, the better I putt, which is a nice thing to have.”

So he’s got that going for him, which is nice.

McIlroy picked up a nice pay day as well. Winning the DP netted him $1.3 million, winning the Race to Dubai added another $1.25 million and his bonus for playing in three of the four Final Series events added $625k to the tally, which totaled out at just shy of $3.2 million. Not a bad haul for a guy who lost the middle of his season to an ankle injury.

McIlroy plans to take eight weeks off from competitive golf, eyeing a return at the Abu Dhabi HSBC Golf Championship on Jan. 21.