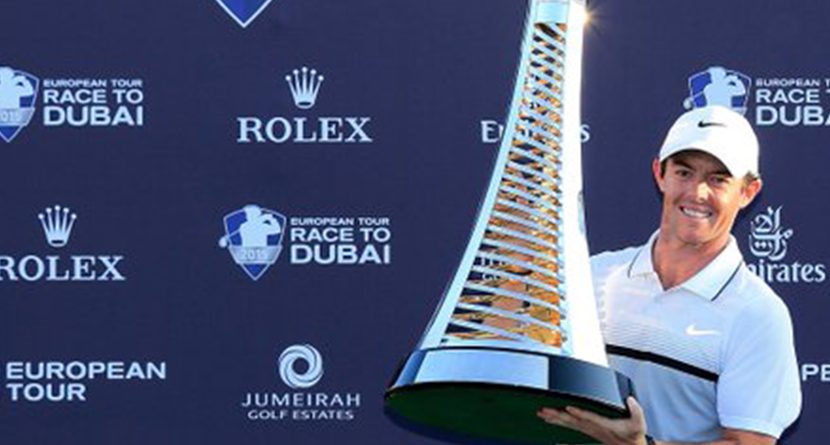 So much for 2015 being a lost year for Rory McIlroy. Despite an ankle injury that sidelined McIlroy through the summer and halted an attempt to defend the Open Championship, the 26-year-old Northern Irishman was able to raise three trophies on the European Tour to win the circuit’s Golfer of the Year Award for the third time in four years.

Thank you for all the congrats on winning @EuropeanTour POY. Some other very worthy candidates, honoured and humbled to win it again.

McIlroy won the season-ending DP World Championship, which in turn allowed him to collect the season-long Race to Dubai, as well as the WGC-Cadillac Championship and the Dubai Desert Classic earlier in the season.

“It is a huge honor for me to be named European Tour Golfer of the Year again,” McIlroy told the European Tour in a statement. “I feel very proud to have won this prestigious award for the third time – it is always special, no matter how often, to be recognized this way.

“After a good first half to the season, the injury was obviously a setback for me, so to finish the year strongly with my second victory in Dubai – plus picking up The Race to Dubai title again – was very satisfying. This was an objective I successfully fulfilled this season. To now win the Golfer of the Year award, too, is a great way to sign off the year. I am already looking forward to starting the new season and trying to achieve even more in 2016.”

McIlroy beat out the likes of Anirban Lahiri, Shane Lowry, Branden Grace, Justin Rose, Danny Willett, Matt Fitzpatrick and Andy Sullivan for the honor, according to Derek Lawrenson, Chairman of the Association of Golf Writers.