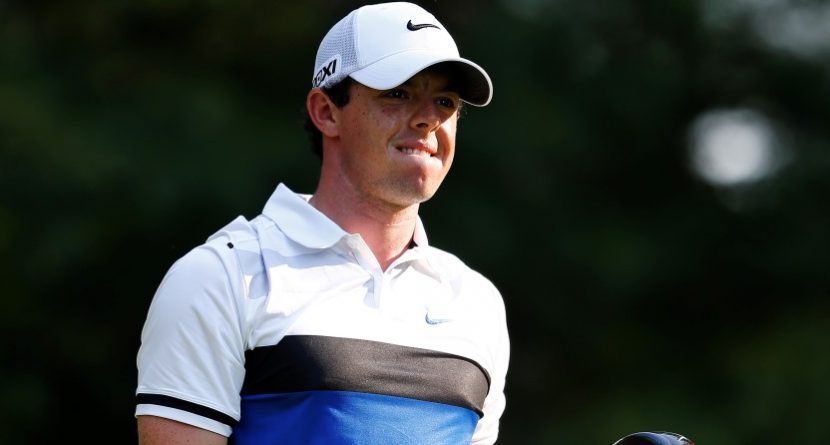 Rory McIlroy’s 2013 season came to an ironic end on Sunday. After posting a 3-under 68 on Saturday at the BMW Championship, he matched that number in the final round. That’s the first time all year that McIlroy recorded consecutive rounds in the 60s at the same event.

Who would’ve thunk that at the beginning of the year, when the then-23-year-old stood at No. 1 in the world rankings? He carded back-to-back rounds in the 60s at 14 different tournaments worldwide in 2012.

But so it goes in the world of golf. Henrik Stenson once dropped from 73rd in the world rankings to 621st, and later from No. 4 to 207; he entered the BMW this week leading the FedExCup standings. And Steve Stricker once rode such a rollercoaster that he was voted PGA Comeback Player of the Year in 2006 and ’07.

McIlroy was one of the six players who actually got in 18 holes on Sunday before rain halted play. The horn sounded while he was in the 18th fairway, but he was allowed to finish. And considering the sloppy conditions, anything in the 60s is considered impressive.

And with that, McIlroy hightailed it out of town and jetted to Monaco – where his girlfriend Caroline Wozniacki owns an apartment – for a four-week break. Hopefully he remembers those 68s as he prepares for the fast-approaching 2013-14 PGA season, which starts in October, and not the dearth of top-five finishes he accumulated (one in 18 events worldwide).

A year ago, McIlroy closed out the year by winning 2012’s final major, the PGA Championship, and two of the four FedExCup playoff events. Those performances, coupled with him winning the European Tour’s season finale in Dubai, rocketed him to the top of the world rankings.

They also helped land him an endorsement deal with Nike, reportedly for $250 million. However, that was McIlroy’s peak.

With a whole new set of clubs in his bag and massive load of expectations on his shoulders, McIlroy missed the cut at the first stop on the 2013 European Tour in Abu Dhabi. Then he bowed out in the first round of the WGC-Accenture Match Play Championship, which uses an NCAA Tournament-style format; McIlroy was a No. 1 seed and fell to 16th-seeded Shane Lowry.

A week later, after stroking an agonizing 7-over-par through eight holes at the Honda Classic, McIlroy walked off the course. He cited wisdom tooth pain as his reason for leaving mid-round – an almost unforeseen act in pro golf – but initially he told reporters who chased him down in the parking lot, “I’m not in a great place mentally.”

McIlroy appeared to have things back on track when he tied for eighth place at the next week’s WGC- Cadillac Championship, but a T-45 at the Shell Houston Open in his next start created more doubts. Those were quickly squelched with a runner-up finish at the Valero Texas Open, falling to Martin Laird by just a pair of strokes.

But that would be the best result of McIlroy’s season. The majors began the next week with the The Masters, and he hung around at 2-under through two rounds. But he dropped like an anvil on Saturday, a 7-over 79 erasing any hopes he had of contending.

By this point, the McIlroy critics were loud and numerous. The reasons for his downfall ranged from his clubs, to his girlfriend, to his commitment to the game.

But his golf career is not finished, not even close. He rebounded slightly to earn another top-10 at the PGA Championship, and his last two days at the BMW Championship give the former world No. 1 some hope on which to cling. Not all is lost.

Hopefully the vacation time in Monaco serves him well. He appears on an upward trend, still has some European Tour events in which he can reestablish confidence, and a one-on-one match with Tiger Woods in late October can serve as motivation.

Here’s hoping that at this time next year we’re talking about McIlroy as the undisputed Comeback Player of the Year.

Other Hot Links:
– Rory McIlroy, Gary Woodland Race in BMW’s New i3
– Golfers Racing BMWs for Cash? It Should Happen
– The Role of Media in Golf