Rory vs. Rickie: Will McIlroy-Fowler be Golf’s Next Great Rivalry? 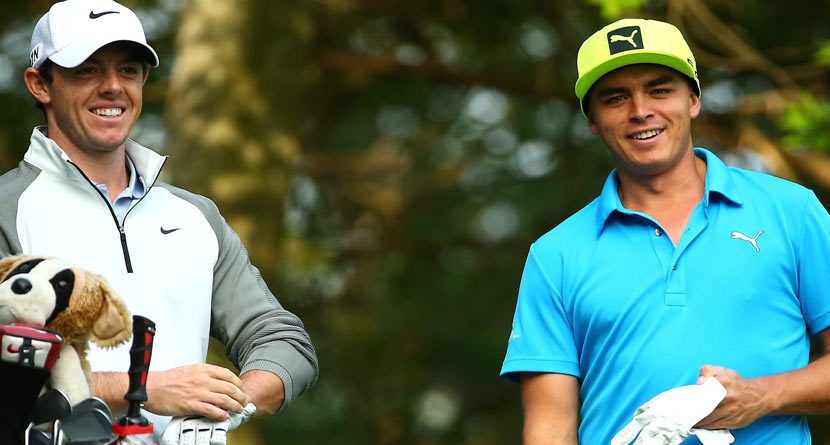 So far, the headlines of the golf world this year (pertaining to strong play) have been dominated by two players almost exclusively: Rory McIlroy and Rickie Fowler.

Sure, Erik Compton had his moment in the sun at Pinehurst in June, as did Martin Kaymer. And Bubba Watson was hot with two wins early in the year — including his second Masters triumph in April. But McIlroy and Fowler have been the two most dominant players in the game in 2014.

And with them both at 25 years of age, things could stay that way for years to come.

McIlroy has won four very big tournaments — including the Open Championship at Royal Liverpool and the PGA Championship at Valhalla. Fowler hasn’t won yet, but he did become the third player in history to finish T-5 or better in all four of the year’s majors, joining Jack Nicklaus and Tiger Woods. Fowler became the first to do so without winning one.

McIlroy and Fowler’s paths have crossed a number of times despite their relatively short careers. This year alone the two stalwarts have gone toe-to-toe in The Open and PGA Championship. Both times, McIlroy outlasted Fowler, claiming his third and fourth career major titles along the way.

The 2014 season wasn’t the first — nor will it be the last — time these guys go head-t0-head. McIlroy and Fowler have been competing against each other since the 2007 Walker Cup, when Fowler and Billy Horschel defeated McIlroy and Jonathan Caldwell 2 and 1 in Sunday’s morning foursomes.

While McIlroy has won 15 times as a professional in just seven years, Fowler has won only twice. Both times, however, it was McIlroy that was the runner-up. In 2011, Fowler won the Kolon Korea Open by six shots over McIlroy. In 2012, Fowler outlasted him and D.A. Points in a playoff at the Wells Fargo Championship to claim his first PGA Tour win.

This budding new rivalry reminds us of one that is still playing out: Tiger Woods vs. Phil Mickelson.

The similarities are pretty interesting with McIlroy in the role of Woods and Fowler as Mickelson. Think about it: Young hotshot, highly-touted with all the skills, bursts onto the scene and starts winning. And not just winning — dominating. In 2000, Woods won his third, fourth and fifth major championships. The first of those two was by 15 strokes in the U.S. Open at Pebble Beach. His first major title came in 1997 at the Masters when he won by 12. Each of McIlroy’s first two major titles? They came by eight shots — the 2011 U.S. Open and the 2012 PGA Championship.

Like Mickelson, Fowler has shown all of the tools and talent to be one of the great players in the game and, without their foil, would probably be considered the best of his generation. Sure, Fowler still needs to do some proving on that front since he only has the one PGA Tour win, but the flat-brimmed wonder has had plenty of opportunities. Remember: Woods and Mickelson were considered rivals well before Lefty claimed his first major at Augusta in 2004.

Still, Fowler has finished inside the top 10 in 25% of majors played since turning pro, and 11 times he’s finished T-3 or better on tour. Had it not been for a few Sunday stumbles, Fowler could have easily had multiple wins before the age of 25.

Perhaps the most exciting part about their rivalry is the respect the two of them have for each other, and knowing that they are as excited for it to play out over the next 15-20 years as we are:

Congrats to @McIlroyRory on some great golf as of late…let’s keep having fun with it!

@RickieFowlerPGA your day is coming… And very soon! Great fight out there, let’s hope for many more battles in the future!

It certainly looks like this epic battle will rage on into the foreseeable future — and for that, the game of golf is thankful.