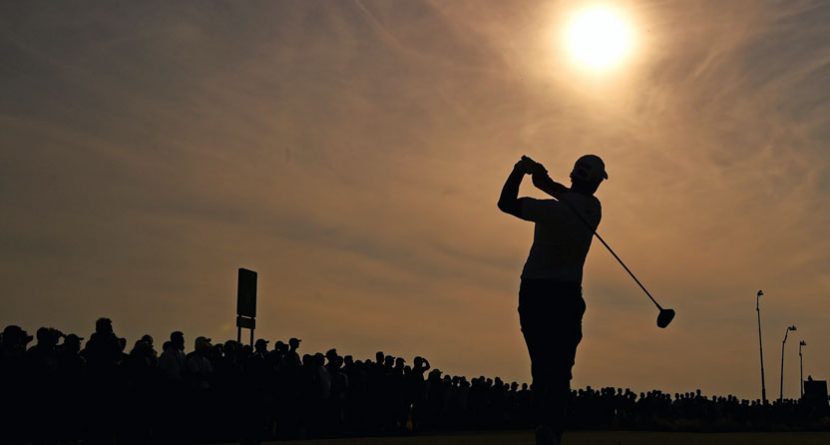 HOYLAKE, England — There are some things in life you can depend upon, and one of them is Rory McIlroy coming out of the starting gate like Usain Bolt. Sure enough, it happened again at Hoylake. The Northern Irishman recorded six birdies in a flawless opening round, carding a 6-under 66 to lead the Open Championship.

He’s in front of the young Matteo Manassero by a shot after 18 holes, and is two ahead of a large group of players at 4 under par, including the Italian brothers Francesco and Edoardo Molinari. Alongside them with rounds of 68 were Jim Furyk, Brooks Koepka and Sergio Garcia, the Spaniard still looking for his first major.

McIlroy made a glorious start. A laser-like approach to the first, he finished three feet from the hole and missed the putt. A stunning iron at the second, he finished six inches away. First birdie of the day. He gave himself another great chance at the third, but missed another short putt. Up ahead, Garcia had birdied three of the first five holes and was sharing the early lead with Edoardo Molinari and Mark Leishman of Australia. But all eyes were on two men: McIlroy and Tiger Woods. The 14-time major champion, returning after injury, made a miserable start, dropping shots at his first two holes.

McIlroy has developed a worrying habit of ripping it up on Thursday and suffering a meltdown on Friday. Before teeing off here, he was 43 under par for the first round in all tournaments in 2014. For round two, he is 11 over, and that is not good enough. No matter, he continued on his merry way with a birdie at the par-5 fifth, which was proving to be the easiest hole on the course.

Robert Karlsson, who has enjoyed a return to form in recent weeks, was in the first group out and he was also the first man to break 70. Playing with David Duval (+1) and David Howell (even par), the giant Swede cruised around in 69. He had taken advantage of perfect weather conditions and an immaculate course, but he knew he wouldn’t be leading at the end of the day.

McIlroy, meanwhile, was having one of those days, with another birdie at the sixth moving him to 3 under. He could easily have been two shots better at that point.

Woods reached the turn at 1 over par and struggled with his putter. He seemed to be the only one, though. At one point, Rickie Fowler, Koepka, Furyk, Koumei Oda and Stephen Gallacher were among a group of 11 players at 3 under, until Fowler, playing alongside Garcia, broke the logjam with a birdie at the 12th to move to -4. Garcia joined Fowler at the next hole. Anybody who had chosen to follow this group was being treated to a feast of wonderful golf. With Garcia there are always questions about his putting, but on this day, on this golf course, his stroke was sound.

Koepka birdied the final hole and was the first to record a 68, followed by his playing partner, Molinari.

McIlroy played his first errant shot at the 11th, but a magnificent recovery allowed him to save par. And yet another birdie at the 12th took him into the lead at 5 under.

And guess what? Woods was bursting to life with birdies at the 11th, 12th and 13th, putting him at 2 under par. Sadly, a wild drive at the 14th cost him a bogey. Now in full flow, he birdied the 15th and 16th holes to get to 3 under par, which is where he finished the day. Manassero, the young Italian who has endured a miserable season, found the links to his liking. He played the front nine in 1 under par, but really got going on the back nine, with birdies at the 10th, 11th, 15th, 16th, and he crowned it with another at the 18th. His 67 took him to top of the leaderboard.

Italy may have bombed it at the FIFA World Cup, but it was enjoying the first day of The Open, all the more so when Edoardo Molinari was joined on 68 by his brother, Francesco. Between them, the three Italians were a cumulative 13 under par for the day.

McIlroy took the lead on his own with a birdie at the par-5 16th, and got a break at the 17th when an errant tee shot finished on a spectator walkway — three feet either way and his ball would have been unplayable. He parred the hole and parred the 18th as well for a round of 66. Now, all he wants to do is to make sure recent history doesn’t repeat itself in round two.

Poor old Ernie made a disastrous start, rounding off a seven at the first with a back-handed effort that missed the hole. After four holes, he was already 5 over and he eventually reached the turn in 43 — the worst of anybody in the 156-man field. He was playing with Watson and Mickelson, the defending champion. Mickelson just couldn’t get his putter going, not for the first time this season and struggled from the start. Bubba moved to 2 under with birdies at the fourth and fifth, before an implosion that saw him tumble down the leaderboard in quick order.

Rose, looking for his third successive victory, ground out the pars, while Scott did what Scott does and quickly progressed to 4 under, with the help of an eagle at the fifth. But when Scott dropped his first shot of the day at the 12th, it looked like McIlroy’s overnight lead was safe.

And so it turned out, with Scott signing for a 68.

It was an astonishing day, with 48 players under par.