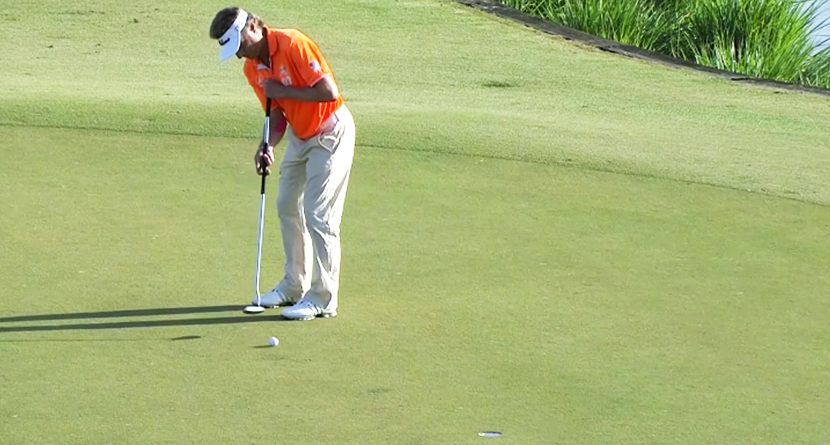 Bernhard Langer won his 26th PGA Tour Champions title at the Chubb Classic this past weekend, but it was his first win since the anchoring ban has been enforced, effective Jan. 1, 2016.

Langer admittedly had trouble adjusting to a new style of putting, but ultimately chose to stick with his broomstick putter and a very similar stroke to what he used when an anchor point was legal. Here’s how he describes how he putts now.

Get a lesson from Langer at 7:30 pm ET on the PGA TOUR Champions Learning Center on @GolfChannel.https://t.co/4VOaLfd50q

The rule in question is the oft-talked about Rule 14-1b, which states:

In making a stroke, the player must not anchor the club, either “directly” or by use of an “anchor point.”

The use of an anchor point during practice swings is fair game, along the same lines as the abnormal use of equipment that we talked about last week. So long as Langer removes the anchor point from his chest during the stroke of the ball, he is free and clear under the current rules.

The key word in that note is “intentionally.” In golf, intent is nine-tenths of the law and we’re expected to trust that Langer is playing fairly under the rules as they state.

Add into the mix a windy day when Langer’s shirt looks to be contacted by his hand and we’ll have the anchoring discussion all over again. The rule is not perfect and the enforcement isn’t either, but intent is where the fault lies, rightly or wrongly.

If Langer finds his adjusted stroke to be the best way for him to putt, the rules say he’s allowed to do so, but he’ll also have to deal with people constantly questioning the legality of it.