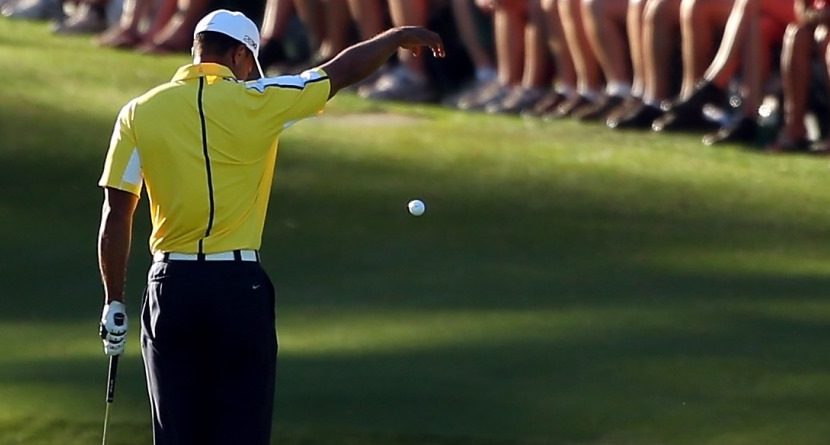 With the Masters less than 10 days away, the Rules Junkie has started to go over past and possible rules infractions that arise at Augusta National. Given some of the false fronts and slopes that lead back into hazards at the National — Nos. 12, 13 and 15 spring to mind — a reader question about taking a proper drop seems timely.

@Wrong_Fairway #RulesJunkie ?About Island greens if you hit the ball on the green and it rolls towards u and in the water.Whr do u hit Itzel

The vagueness of Joey’s question brings many variables into play as it pertains to the different kinds of drops, hazards and local rules that may be in place. What kind of hazard did the ball roll into: a red lateral water hazard or a yellow water hazard? Is there a drop zone? Did you receive a local rules sheet?

The rule that takes on all of these inquiries is Rule 21-6b, which reads:

26-1. Relief for Ball in Water Hazard

If a ball is found in a water hazard or if it is known or virtually certain that a ball that has not been found is in the water hazard (whether the ball lies in water or not), the player may under penalty of one stroke:

a. Proceed under the stroke and distance provision of Rule 27-1 by playing a ball as nearly as possible at the spot from which the original ball was last played (see Rule 20-5); or

The biggest takeaway from these scenarios is to be observant. Knowing your surroundings and your options will be key in giving yourself the best chance to limit the damage on your score. Replaying the shot from “as nearly as possible” to the original spot is always going to be your safest option, but not always the most beneficial.

Regardless of what type of hazard you hit into, you can also always keep the spot the ball crossed the hazard in line with the hole and move as far back on that line as you’d like. If it’s a red-marked lateral hazard, you gain two more options, which includes the popular two club length drop.

Learn all the options and embrace them. The Rules of Golf are in place to govern play, but they can also be used to your advantage.