Rules Junkie: How Do You Get A 4-Stroke Penalty? 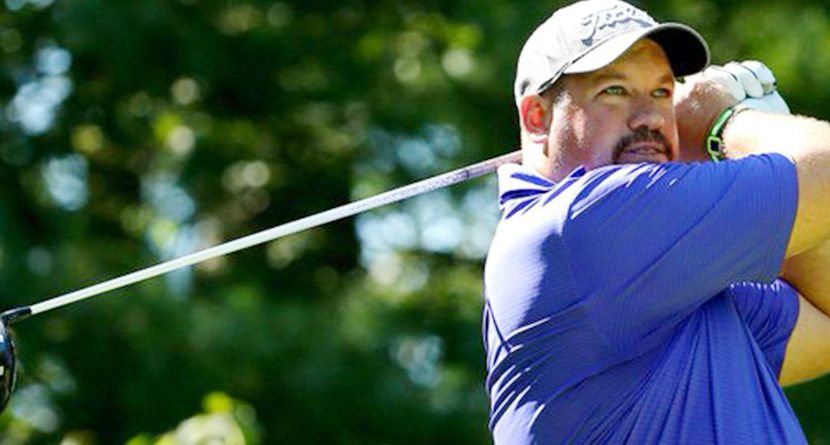 You probably know that there are innumerable ways to incur a one- or two-stroke penalty during a round of golf, but a four-stroke penalty? Now, that’s something different, but that’s exactly what Zimbabwean Brendon de Jonge incurred during the second round of this past week’s Northern Trust Open.

Brendon de Jonge’s day at the Northern Trust Open got off to a solid start with a two-putt birdie at the first hole.

Things quickly became more complicated, however, when he missed the green at No. 2 and reached for his 60-degree lob wedge. That’s when he noticed the shaft near the butt of the grip had been dented.

The damage occurred a day earlier when de Jonge had to play a chip shot on his final hole on Thursday with the same wedge from a difficult lie. De Jonge thought the ball was plugged, but he was not allowed relief by a PGA Tour official.

Frustrated, de Jonge swung the handle of the wedge into his golf bag, but didn’t realize he had damaged the club.

The unnatural damaging of the club made it unplayable for the remainder of his first round, which lasted only a few more strokes. However, not realizing he still had the damaged club is his bag and not using the 60° to warm up, de Jonge began his second round with an unnaturally damaged club in his bag.

Having birdied the first hole and then missing the second green, de Jonge went to pull his 60° to play a greenside shot on No. 2. Realizing he had the damaged — and thus non-conforming — club in the bag meant that he had incurred a penalty, but which one?

Under Rule 4-3b, de Jonge’s wedge is declared non-conforming since it was not damaged in the normal course of play, which would include situations such as following through and striking a tree, causing a dent to the shaft.

If, during a stipulated round, a player’s club is damaged other than in the normal course of play rendering it non-conforming or changing its playing characteristics, the club must not subsequently be used or replaced during the round.

The use of the damaged club would result in disqualification, as Anthony Kim found out in the 2008 HSBC Champions. But, since de Jonge had not used the club, he fell under the alternate penalty of the rule.

Therefore, de Jonge’s start to the second round, which was completed as 4-4 was bumped up by four strokes to 6-6 for his infraction.