Rules Junkie: How The USGA Made The DJ Decision And Why It Was Flawed 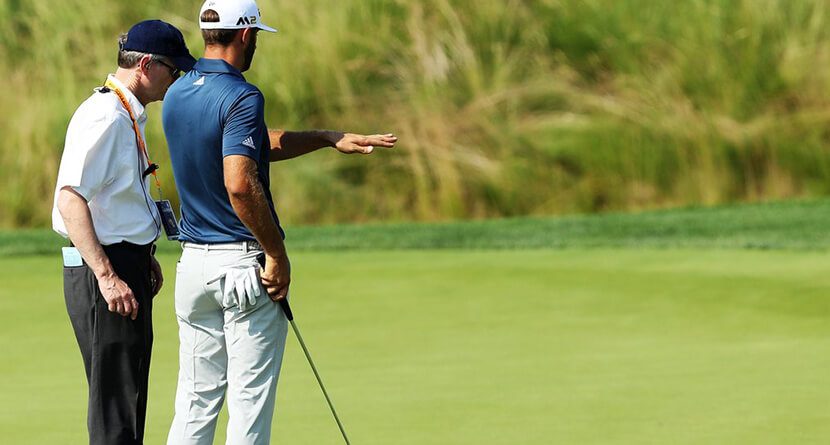 Sunday at the U.S. Open was hijacked by a rules controversey on the 5th hole that had everyone tuned in to the coverage channeling their inner Rules Junkie. While people considering and discussing the Rules is the best way to learn the nuances of them, the botched execution of the USGA during that final round set a bad example for those watching around the world.

Close up look at Dustin Johnson’s golf ball moving, he may be penalized a stroke after the round https://t.co/MouadHgDpa

On the 5th green, Dustin Johnson prepared to address his ball when it tilted backwards a dimple or two. DJ immediately stepped away and called in a rules official who, with input from Johnson and playing partner Lee Westwood, agreed that Johnson had not caused the ball to move and allowed him to play his ball from its new position under the revised Rule 18-2. Ball at Rest Moved.

(Before we go any further, let’s dispel the notion that under Rule 34-2 the walking referee’s decision is final. In a championship such as the U.S. Open or any PGA Tour event, really, a committee of rules officials have the final say. A walking referee is more of a safety net for the player. If a walking official grants a ruling, the player can’t be penalized for that specific ruling later on.

In this case, because Johnson was ultimately assessed a penalty, he should have had to move his ball back to its original position. However, because the walking referee gave him clearance to play from the spot the ball had moved to, he was not assessed a further penalty for playing from an incorrect position.)

Now, back to the question at hand. The Rules Committee used The Decisions of Golf, as Geoff Shackelford pointed out in his piece for GolfDigest.com.

The Decisions of Golf, a more detailed explanation of various rules, say that in situations where there are questions as to why a ball moved, the committee has to consider the “weight of the evidence.”

From Rule 18-2/0.5, titled “Weight of Evidence Standard for Determining Whether Player Caused His Ball To Move.”

With reference to the considerations above, here is the key example the USGA relied on:

-A player’s ball lies on a flat portion of the putting green on a day with light winds. The player addresses the ball and the ball immediately moves. Under these circumstances, it is more likely than not that the act of addressing the ball caused the ball to move.

To understand that fully, a key point to remember is reasonable doubt doesn’t matter; “weight of the evidence” only needs to be 51%. So, the question becomes “what was so compelling that the Rules officials believed with a 51% certainty that Johnson caused his ball to move?”

They’re answer was the proximity of his putting stroke and the immediacy of the ball moving. That’s where the USGA’s thinking was flawed. We can only see one camera angle from some 50-60 yards away behind the fifth green. The blown up version that you can watch above does not clear up the problem this presents. Johnson’s putter appears to be right next to the ball, but camera angles can play tricks on your eyes. Just a few holes later, DJ looked to have a tap-in for par when Fox Sports’ Paul Azinger said that the putt was four feet away. After Johnson’s putt creeped into the hole, Azinger commented, “That took a long time to get there.”

That there were not different camera angles to show truly how close Johnson’s soled practice stroke was to the ball does not seem to account for a great deal of evidence. Furthermore, take into consideration the type of grass used on Oakmont’s greens — poa annua — and their speed —14.8 on the Stimpmeter at the beginning of the day.

Poa annua is weed that grows unevenly. Even with the level of care taken at a U.S. Open venue, Johnson placing his ball on an elevated piece of poa that is tightly mown could have been moved by the slightest breath of wind or as a result of a club dropping 25 feet away on the green. Again, the weight of evidence is paper thin.

Finally, the “weight of the evidence” is a debatable and subjective measure. The true tragedy here comes from the precedent the USGA is setting. Both Johnson and Westwood were adamant that DJ did not cause the ball to move. The USGA is essentially tossing out the integrity of the players in favor of a grainy and poorly-angled camera shot. That’s a slippery slope to start going down, especially given the fickle and selective nature of televised golf.

Have a rules question you want answered and explained? Tweet @Wrong_Fairway with the hashtag #RulesJunkie or email your question to chris@swingbyswing.com and you could see your question answered in the Rules Junkie column.

Rules Junkie: Building A Stance In a Bunker