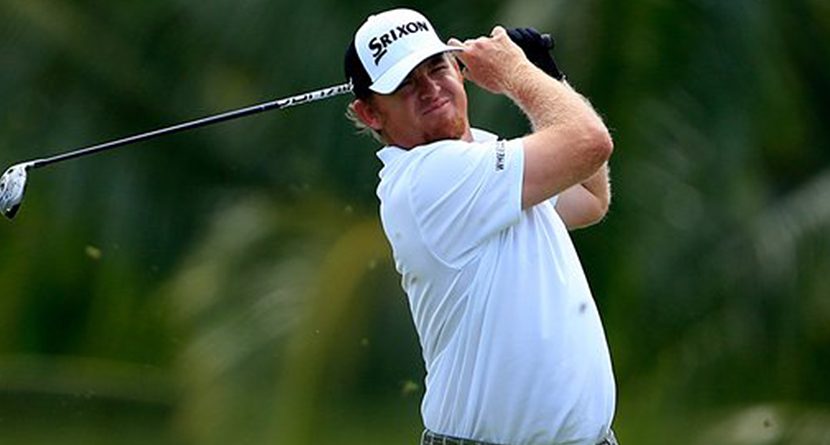 J.B. Holmes didn’t have the showing at the WGC-Cadillac Championship last week that he or many others expected. The runner-up in 2015, Holmes shot rounds of 77-72-72 to sit at 5-over par and 17 shots back of the leader entering the final round on Sunday at Trump National Doral.

If a ball is found in a water hazard or if it is known or virtually certain that a ball that has not been found is in the water hazard (whether the ball lies in water or not), the player may under penalty of one stroke:

a. Proceed under the stroke and distance provision of Rule 27-1 by playing a ball as nearly as possible at the spot from which the original ball was last played (see Rule 20-5); or

It’s important to note the different provisions under 21-1c because that’s where Holmes got mixed up. Here’s how Phil Tataurangi on PGA Tour Live described it:

Hopefully this is the most confusing thing we see today on PGA TOUR LIVE. https://t.co/nLKhWcrkmH

As Tataurangi explained, Holmes took pieces of the “opposite margin” option and combined that with 21-1b. Holmes moved some 25 yards back of the hazard line, keeping the point at which the ball last crossed the hazard between him and the hole (21-b) from the opposite side of the lake (21-c), thus breaking the rule for an improper drop, which officials labeled as a “serious breach” of the rules.

Holmes was told of his error when he reached the first green and as a result, had to return to where he should have played his third shot from and incur a two-stroke penalty. Had Holmes finished the hole and hit his first shot on the second hole, the rules infraction would have resulted in him being disqualified.