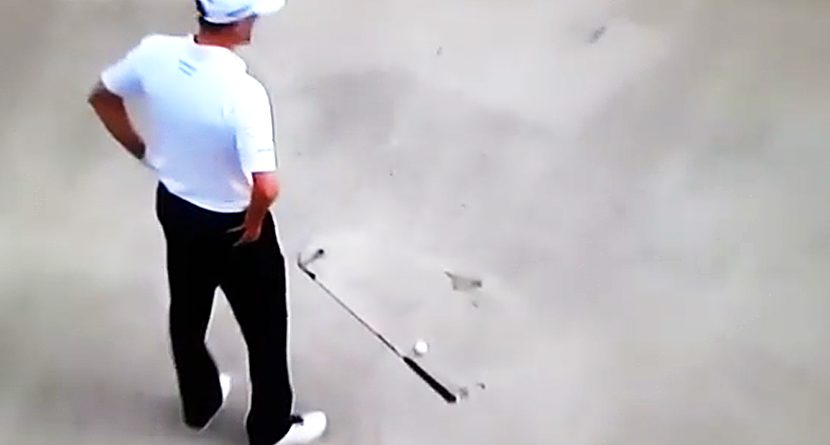 The most common rules questions center around whether or not a player is going to be docked a stroke. The natural competitive edge of golfers must fight against their integrity when assessing situations and therefore, we see a lot of discussion concerning hazards and the like.

A unique example of this very phenomenon befell Scotsman Russell Knox at the WGC-Cadillac Championship a few weeks back when he accidentally dropped his club in a greenside bunker prior to hitting his shot.

Oops. Russell Knox drops his club nearly on his ball in the bunker!

To assess the situation, we go to Rule 13-4b, which states:

Except as provided in the Rules, before making a stroke at a ball that is in a hazard (whether a bunker or a water hazard) or that, having been lifted from a hazard, may be dropped or placed in the hazard, the player must not:

a. Test the condition of the hazard or any similar hazard;

b. Touch the ground in the hazard or water in the water hazard with his hand or a club;or

c. Touch or move a loose impediment lying in or touching the hazard.

1. Provided nothing is done that constitutes testing the condition of the hazard or improves the lie of the ball, there is no penalty if the player (a) touches the ground or loose impediments in any hazard or water in a water hazard as a result of or to prevent falling, in removing an obstruction, in measuring or in marking the position of, retrieving, lifting, placing or replacing a ball under any Rule or (b) places his clubs in a hazard.

In this case, the exception to Rule 13-4b comes into play. Knox accidentally dropping his club was not testing the condition of the hazard, nor did it improve the lie of the ball. Also, it should be pointed out that the dropped club avoided making contact with his ball, which would have resulted in a penalty.

It was a nervy moment for Knox because on its face, there seems like there was some kind of wrongdoing. However, this is one of the few times that the rules give some leniency to human error. There was no intent to improve his position, lie or next shot, so Knox was able to play his next stroke with no penalty.