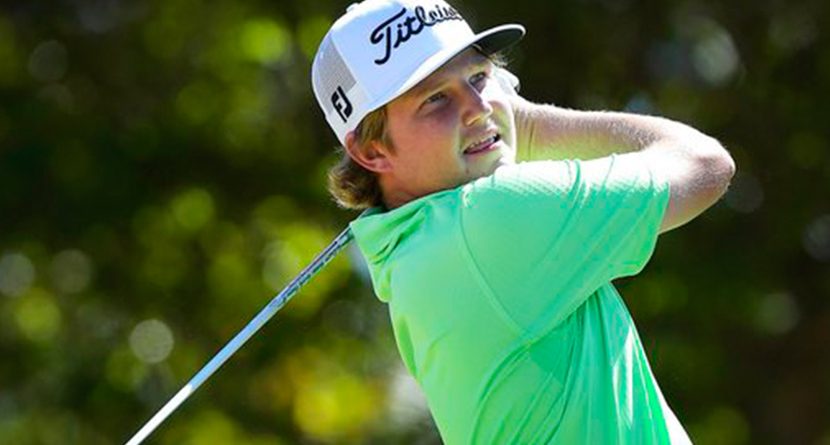 If you had the under on the number of weeks of major professional golf in 2016 before we had our first anchoring controversy, congratulations, you’re a winner.

Last week, there was not one, but two instances that brought the newly-implemented Rule 14-1b into clearer view.

Our first brush with the new rule came in the EurAsia Cup, the biennial competition that — you can guess from its name — pits Europe against Asia in a Ryder Cup-style format.

The Asian Team’s Shingo Katayama still uses a broomstick putter, which is perfectly legal, but the question arose if he was creating an “anchor point” with his right elbow against his waist. The crux of the rule is in its simplicity.

In making a stroke, the player must not anchor the club, either “directly” or by use of an “anchor point.”

The problem was brought to the public’s attention when Twitter’s @SecretTourPro stirred the pot by posting this picture of Katayama from a poor angle.

This is the putting stroke in question! I thought arms couldn’t touch body? Anchored if you ask me! #StupidRule pic.twitter.com/Xcbucu5xqw

STP is correct in his understanding of the rule, but wrong in his application.

Given a better view of Katayama’s stoke, (such as the one below courtesy of Golf Channel) you can see how his putting stroke is the exact intent of the rule. Players are free to use broomstick putters and belly putters — those were not the victims of the ban — but they cannot be used in an anchored position, which Katayama clearly was not doing.

All in all, STP’s poor-angled picture should have done more for clearing up questions about the ban. It dispels misconceptions about the legality of the longer putters that were previously used to make anchored strokes and it shows an acceptable adaptation to the rule.

Our second close call with 14-1b came during the final round of the Sony Open in Hawaii. In contention down the stretch, Zac Blair pulled a fairway medal from just off the green in an attempt to hole his birdie opportunity. Using a longer club and standing only 5’6″ with a baggy shirt, questions were brought up by the rules officials on the ground whether or not Blair used an anchored stroke on the shot.

Zac Blair was this close to chipping in with a fairway metal at No. 17. He’s one back. #QuickHits https://t.co/Eo77MzSFnX

Without context, the shot looks harmless. A good bit of skill in a tight spot with the tournament on the line, but given the back drop of an possible anchoring infraction, there are shades of gray.

Upon closer inspection, Blair’s left arm blocks where the butt of his club is in relation to his body during the actual hitting of the shot. The most damning culprit is his follow through, which clearly wrinkles his shirt at the butt of the club. However, under Decision 14-1b/6, the intent of the stroke is brought into play.

Q.When making a stroke, a player’s club or gripping hand inadvertently comes in contact with or brushes against his body. Is he in breach of Rule 14-1b?

A.No. The prohibition in Rule 14-1b applies only to a player who intentionally anchors a club, either directly or through use of an anchor point, in making a stroke.

Rules officials asked Blair about the stroke after the round, whether or not he anchored the club or intended to. Blair responded by telling them that, no, he hadn’t anchored the club into his stomach, nor did he intend to. Only because he was wearing a baggy shirt did the butt end of the club come in contact with his clothing.

No penalty was assessed and nor should one have been.