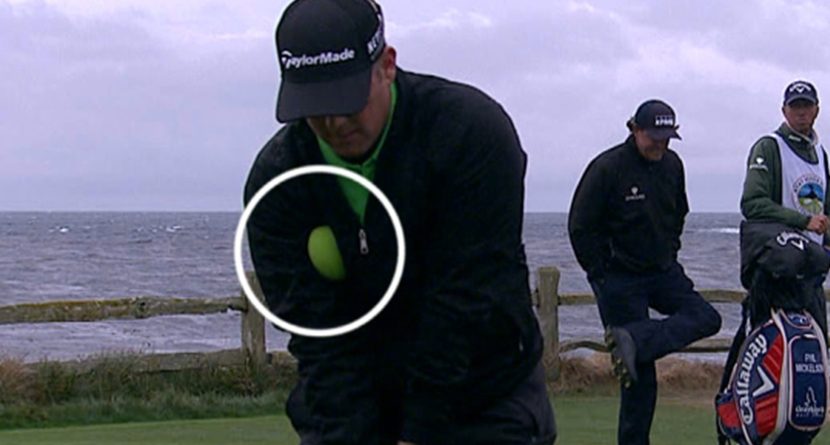 The Rules of Golf are filled with distinctions, interpretations and shades of gray. So, when Jason Dufner stuck an additional golf glove under his left arm during the final round of the CareerBuilder Challenge in partnership with the Clinton Foundation, predictable questions arose on social media: is that a swing aid? Is that legal? Should he be disqualified?

Glad you asked, because this is one of those rules and decisions that has some shades of gray built into it and also brings back a (not-so) memorable moment for D.A. Points at the 2014 AT&T National Pro-Am.

First, the rule in question is Rule 14-3, Artificial Devices and Unusual Equipment; Abnormal Use of Equipment, which states:

Rule 14-3 governs the use of equipment and devices (including electronic devices) that might assist a player in making a specific stroke or generally in his play…Except as provided in the Rules, during a stipulated round the player must not use any artificial device or unusual equipment, or use any equipment in an abnormal manner:

a. That might assist him in making a stroke or in his play; or

b. For the purpose of gauging or measuring distance or conditions that might affect his play; or

c. That might assist him in gripping the club, except that:

(i) gloves may be worn provided that they are plain gloves;

(ii) resin, powder and drying or moisturizing agents may be used; and

(iii) a towel or handkerchief may be wrapped around the grip.

While Dufner sliding a glove under his arm may seem like he was using equipment in an abnormal matter, that distinction is counteracted by subset “a.” which says that it might assist him in making a stroke, which is where Decision 14-3/6.5 clarifies “the prohibition in Rule 14-3 against using equipment in an abnormal manner applies to strokes that count in the player’s score and not to practice swings or practice strokes.”

Dufner’s all clear. The glove, while it would have been an abnormal use of equipment had he kept it tucked under his arm while making an actual swing at the ball, is perfectly fine to use during practice swings at no penalty.

Additionally, it should be noted that there has also been a revision to the penalty for illegal use of a swing aid. Whereas Points was disqualified from Pebble Beach in 2014 for the first-time use of an illegal training aid, the 2016 edition of the Rules of Golf now charges only a two-stroke penalty for the first infraction and disqualification for subsequent infractions.