Rules Junkie: When Testing The Surface Is Legal 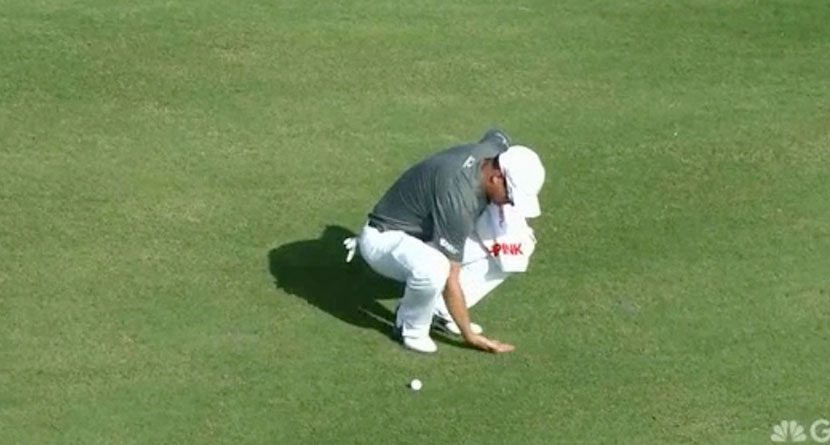 If you’ve played golf in South Florida, you know that the grain of the grass has an unusually strong impact on the way you play your shots on and around the green. The way the grass grows can have an effect on how your putt breaks or how your club will react to the ground from which you’re either pitching or chipping.

So, how do you determine which direction the grain of the grass is growing when you’re on the green? You can either look for a slight color change (down grain will look more glossy) or you check the cup (the rugged, broken grass on one side of the hole will tell you which way the grain is growing).

Being off the green, however, affords you an easier way to assess the grain. Zach Johnson elects to rub the grass with his hand and see how the turf reacts when he is not on the putting surface. This lets him know which way the grain is growing and allows him to better choose a club for the upcoming shot.

Now, if you’re wont to do this, expect to receive a little heat from some overzealous rule enforcers — as Johnson said he encounters multiple times per year and most recently during the 2015 Hero World Challenge — whose intentions may be good, but whose understanding of the rules is lacking.

Zach Johnson isn’t grainy when it comes to knowing his rules!

As Johnson mentioned, testing the surface is prohibited only on the putting surface under Rule 16-1d.

During the stipulated round, a player must not test the surface of any putting green by rolling a ball or roughening or scraping the surface.

The only other stipulation would stem from Rule 13-2, which states “A player must not improve or allow to be improved his line of play or a reasonable extension of that line beyond the hole by moving, bending or breaking anything growing or fixed.”

By stepping back and to the left of his line in a run-off area, Johnson avoided any semblance of a penalty under 13-2 and was able to legally learn more about the turf in order to make the most prudent play.

With the PGA Tour in Miami this week, be cognizant of the grain of the grass and how players will try to determine which way it is growing. And let your friends know that if a player tests the surface with their hand as Johnson did, so long as it is off the green and not in his intended line of play, there is no penalty.