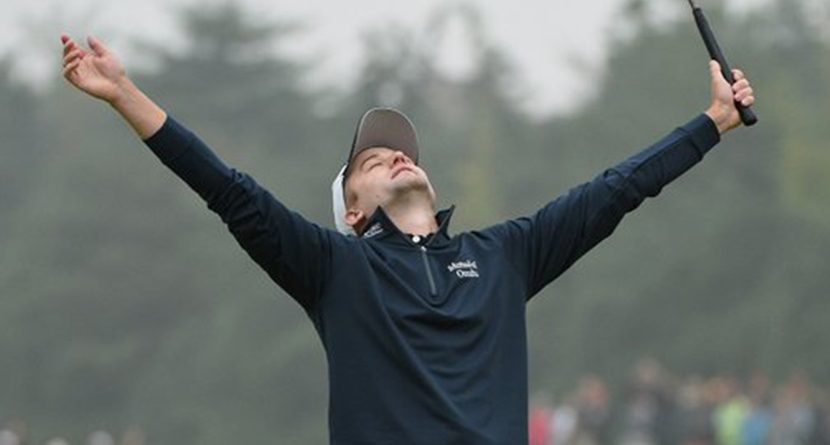 While you were sleeping, Russell Knox was busy in China adding a his name to the list of first-time winners on the PGA Tour, the fourth to do so in as many weeks, winning the World Golf Championships HSBC Champions. Knox’s win, easily the most impressive of the young 2015-16 wraparound season, came over a field that featured guys like Jordan Spieth, Rory McIlroy, Dustin Johnson and Patrick Reed, all of whom contended and finished inside the top-11.

Knox, a 30-year-old Scot, was an alternate at the year’s first WGC and upon getting the news that he had been added to the field, scrambled to obtain a visa while in Malaysia for last week’s CIMB Championship, in which he finished T21. As the Associated Press tells it, Knox’s wife, Andrea, filled out the necessary paper work and met with the Chinese consulate in Malaysia to make sure her husband could get to Shanghai for the event.

Once safely at Sheshan Golf Club, Knox fired rounds of 67-65-68 to grab a piece of the lead heading into the final round. Playing alongside Johnson and Kevin Kisner in the final pairing, Knox birdied two of his first three holes to put himself atop the leaderboard, a position he would prove too tough to relinquish. While Spieth and Reed, along with hometown favorite Haotong Li, started the day within striking distance, none of the three could get anything going to put pressure on Knox.

Johnson looked to be Knox’s latest foil, matching his birdies at the second and third holes, but a Tiger-at-Augusta bad break at the par-5 8th hole derailed Johnson.

This is the unluckiest break of the week. Golf is hard. #QuickHits https://t.co/sw4cygJyCi

A new crop of contenders emerged following DJ’s ejection: Brendan Grace, Ross Fisher and the early-posting Danny Willett. Grace went out in 4-under par 32 to apply some early pressure and reach 16-under, but an up-and-down back nine saw him shoot an even-par 36 on the back, falling short of the number needed. Similarly, Fisher played a solid front side to get into contention, but an uneventful back nine kept the Englishman three shots back in the end. Well ahead of the leaders, Willett fired a final-round 62, 10-under par, to post 17-under, a number only Kisner and Knox would be able to better.

Kisner, Knox’s 54-hole co-leader, could only muster three birdies against one bogey on the final day to notch his fourth runner-up finish of 2015.

For Knox, the usual accolades accompanied his first win: million-dollar paycheck, job security and of course, a Masters invite.

“I got married on Saturday of the Masters,”‘ Knox said afterward. ‘”What a great wedding anniversary we’re going to have.”

Knox, previously 85th in the Official World Golf Ranking, will move inside the top-50 in the OWGR and earn privileges that distinction brings.