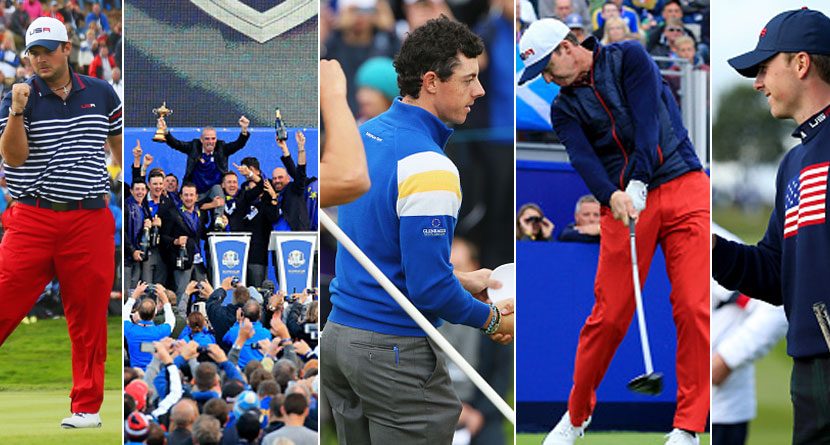 The Ryder Cup is complete. Team Europe retained the cup with a dominant showing at Gleneagles.

There were many memorable moments, shots and matches that we’ll surely look at for the next two years. As we wait patiently for the 41st Ryder Cup at Hazeltine National, here are five things we learned at this year’s event:

It Went From Worse To Worst For The U.S.
Coming off of 2010’s loss at Celtic Manor, the U.S. came out firing in 2012 at Medinah. Then the “Miracle at Medinah” happened. The U.S. couldn’t replicate Europe’s firey comeback this year and ultimately fell flat on its face at Gleneagles. There are clearly issues with the process and in the quality of play from the Americans in this format — the foursomes, in particular. Can they turn it around in 2016? Our fingers are crossed, but our expectations have never been lower.

Patrick Reed Is Built For The Ryder Cup
Love him or hate him, Patrick Reed is interesting. After calling himself one of the world’s top five players earlier in the season, he backed up his wild claims with some fantastic play this weekend. He went 3-0-1 during the weekend and did so with some fiery play. We’ve heard so much about Ian Poulter’s play at the Ryder Cup and what he means to the European side. Perhaps Reed can build that type of reputation for the U.S.

Rory McIlroy Is, In Fact, The World’s Best Player
The stats back it up, his year did too. If there was anyone anywhere questioning whether or not Rory McIlroy was the best in the world, they were answered Sunday. McIlroy absolutely demolished Rickie Fowler, winning 5 and 4 in what was being hailed as the biggest match of the day. For Americans, it was a sad state seeing their great hope going down so easily. For the world’s golf fans, it was impressive to see the best at his best.

Youth May Be On USA’s Side
It’s not all bad news for the U.S. If American golf fans can take one thing away from this year’s Ryder Cup, it’s that our youth can play a little bit. Reed, as mentioned, was fantastic. Jordan Spieth showed some game, too, before giving it up to Graeme McDowell late in their singles match. And, while Fowler struggled on Sunday and didn’t win a match, he did play hard — and at times, very well — to turn in a few halves. With the three of them, along with the likes of Billy Horschel, Dustin Johnson, and Chris Kirk, among others, the future at least has the chance of being bright for the U.S.

Jimmy Walker Is As Good As We Hoped
Of all the players in the Ryder Cup, it’s safe to say that Jimmy Walker was the easiest to overlook. He’s not flashy, he’s not your typical Ryder Cup rookie, and, well no one really gave the U.S. a shot to contend, anyways. But he played great. He paired with the streaky Fowler and earned three hard-fought halves and then mopped the floor with Lee Westwood on Sunday. After three wins this year on tour, look for Walker to continue to be a name mentioned as a contender at the biggest events next season.